If you have ever tried to catch the ferry from Vieques, a mere 1-hour boat ride from Puerto Rico, you might what to prepare yourself for an adventure. Some might call it an ordeal.

On our first attempt, at nearly 5.00 pm, we finally received the go-ahead; we would be allowed to board the 1.00 pm ferry!!

We had sat in line in the Puerto Rican heat for nearly 2 hours waiting for the ticket window to open. We were informed it would not open until one hour before the ferry leaves- ‘That makes it 12 o’clock right?‘.  Everyone in the queue agreed, looking quizzically at their watches, ‘So it should have opened an hour ago?‘ again everyone in the line agreed, looking at their watches as if to be enlightened with some explanation!

The security lady in charge of the queue gave the impression that perhaps she was there in some kind of crowd control capacity for a happening that we could only imagine. But, did not seem overly prepared to engage in English and appeared equally perplexed that the ticket window had not opened yet. This did not instil a feeling of confidence in our growing queue community.

Our queue was starting to resemble the front of an Apple store the night before a new iPhone release! People were lying around in whatever makeshift camp made them comfortable with equal anticipation and staunch defence of their place in line (the group in front of us had pizza delivered to the queue!).

I had begun to count the times Mark said “It’s hot” and reminded him that it would be hot for the six months. Cracks were forming!

At last, the ticket window opens, united we jump to attention and ready ourselves to leave this steaming hot god-forsaken queue and finally board the ferry. 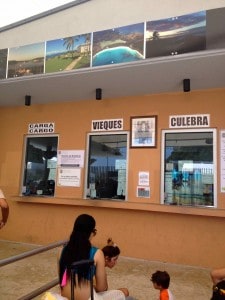 The first in the queue approaches the window. She is shooed away, being told something in Spanish that no one in the front of the line was able to decipher. More confusion.

There had been a small line of Puerto Ricans forming next to our much more organised and purposeful line that consisted of mostly Gringos, united by resort attire and the obligatory holiday fedora. We had just assumed they were going somewhere else because we were told to stand in this queue for Vieques! This is the Vieques queue!!!   The first of the Puerto Ricans were summoned toward that holy grail of the ticket window. They had tickets! They were heading to the ferry!

Noooooooo! What about us?

Finally, we establish that even though we were told we could buy a ticket as soon as the window opened, we still had to wait for the residentes of the island to go first.

That’s why there were mostly Gringo’s in our queue! We weren’t in the line for Vieques at all; we were in the ‘tourist queue’ for Vieques!!!

Ok, we can deal with that. Once the small line of residentes were processed, our fearless leader of queue Gringo again approached the bench. Again, she was shooed away back to the Gringo echelon that was now becoming restless. Word goes down the line-

‘We can’t buy a ticket until ALL residentes have a ticket’. ‘But they do, the line is clear’ we protest. ‘No, there could be more! They say depending on how many resedentes turn up maybe only a few of us will be able to go on the ferry, if any!’ So we had to wait on the premise that someone might turn up for a ferry that in theory has already left!

The line becomes even more restless, the girl in front of us had been trying to get a ferry since 8.00 am that morning, it was now 2.30 pm! We were having none of that! We step forward and protest that we are resedentes, we are The House Sitters! People give up and leave the queue to find a hotel room and try again the next morning. Secretly we both begin to worry that may soon be us.

Eventually, after being sent back to our line, we are granted permission to approach the bench on the premise that we were resendente and pay our $2 for the ticket we now had waited 3 hours for.

With a sense of relief (and feeling a little smug) we left our fellow Gringo’s and headed to the ferry terminal to take our seat and wait for the 1.00 pm ferry- that was still to arrive when we are headed off by another set of female security guards.

We protest “resendente, resedente” this provoked no response other than directing us towards a small roped off area that clearly was not for the ferry entitled. Soon one by one our former queue compadres straggled in, crushed fedoras in hand, to join us in our Gringo holding pen. We no longer felt smug at our small win in escaping the queue; now, we were just in a different queue. Thankfully this was one with seats! 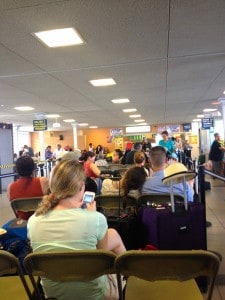 More and more resedentes were piling into the waiting hall; this was not good! People were sitting on the floor again. The security ladies had now formed three or four different roped off areas as if to establish a hierarchy of passenger. Where did we fall in that hierarchy? We were trying to remain calm, but secretly we were both envisaging a night in a shitty overpriced hotel in this back block port town- Would we have to queue for that too?!

We hear a gringo in our small roped off square speaking Spanish! Oh yes, the two of us look up and quickly enlist him as if he will be our only hope of convincing someone, anyone that we didn’t deserve to be in the Gringo pen. That we should be moved along with the bags of live chooks to the area for those that must be, will be on that ferry. He must get us some details. At this point, even we could understand there was also rising unrest amongst the resedentes (and they were guaranteed passage!).

The cracks that formed had become desperation, and it was still hot as hell! (just ask Mark).  It wasn’t the waiting that was getting to us; it was waiting with uncertainty. Would this all be a waste of time?

It would appear that the 1.00 pm ferry had broken down and that ‘if’ there was the room we would all be going on the 4.00 pm ferry, but it would also have to transport those for the Island of Culebra.

“What do you mean the 4.00 pm ferry? It is already after 4.00!”.   Our new Spanish speaking friends advice was “You are in Puerto Rico now, this is how things go!” This was of no comfort to us who had now been at this ferry terminal for over 4 hours with a ticket but no guarantee of passage—or meeting our hosts as planned at the other end. How could we be model house sitters if we could not even manage to arrive on time or worse – arrive at all?!

Finally, a boat arrived. An announcement is made in Spanish. We all look to our new friend. He could not hear it properly! The Puerto Ricans start moving. What is happening? A well-meaning Puerto Rican seeing our confusion leans over from his area of privilege and tells us that passengers for Vieques will be loaded first. We sigh with relief – we are finally going.

Suddenly people start rushing to form more queues. It’s a queue, quick get in it! We rush too, boldly leaving our roped off area without permission, damn! Foiled again by the overzealous queue guards, we must wait for residentes. We can’t understand, surely they must know how many tickets they have sold. Over and over again, we try to rationalise the method here but to no avail. At last, the Gringo holding area is opened, and we rush to secure our place in the line. We will not miss this ferry! (Although we are still not confident).

Finally, at around 5.00 pm everyone is loaded on the 1.00 pm ferry, and we begin to wonder what all the fuss was about. Why would they instil such doubt in us that we were even going to get here? We reflect on the people that gave up and left the line, our fallen comrades in resort wear. If only they had waited. Will they go through all of that again tomorrow?

At 6.00 pm we finally disembark at our destination, the island of Vieques. When we tell our host of the ordeal we have endured just to make the hour-long passage from the big island, he just shrugs and says “Hmmm, the ferries can be very unreliable” It is then we think about what our Spanish speaking friend from the Gringo holding pen had said and realised we had just stepped into Vieques time – relax, you’ll get there….eventually!

(Although we are both secretly thinking about this unreliable ferry being our main mode of transport off this island of no hurry).

Editors note – Even after all the fuss there were still plenty of empty seats on the ferry…even taking into account the live chickens!