The first intrepid explorers to venture into the jungles of Borneo told tales of exotic animals and plant life, headhunting tribes and witch doctors. It is the same romance of exploration and adventure that still draws people to this exotic island.

The third largest island in the world and the largest in Asia, Borneo is shared by 3 countries; Brunei and Malaysia to the north and Indonesia to the south.

Malaysia occupies approximately 26% of the country which includes the state of Sabah to the north and Sarawak to its south.  Having three countries in one makes Borneo a very interesting island to visit.

At over 140 million years old Borneo boasts one of the oldest rainforests in the world and one of the planet’s most biologically diverse ecosystems. Borneo is a nature lovers paradise.

Dense jungles, beautiful beaches, awe inspiring mountain ranges, pristine diving and an abundance of wildlife are just the tip of what Borneo has to offer. This is a snapshot of Malaysia’s slice of Borneo.

Discover More About Travelling in Malaysia

Should You Travel to Penang or Langkawi? 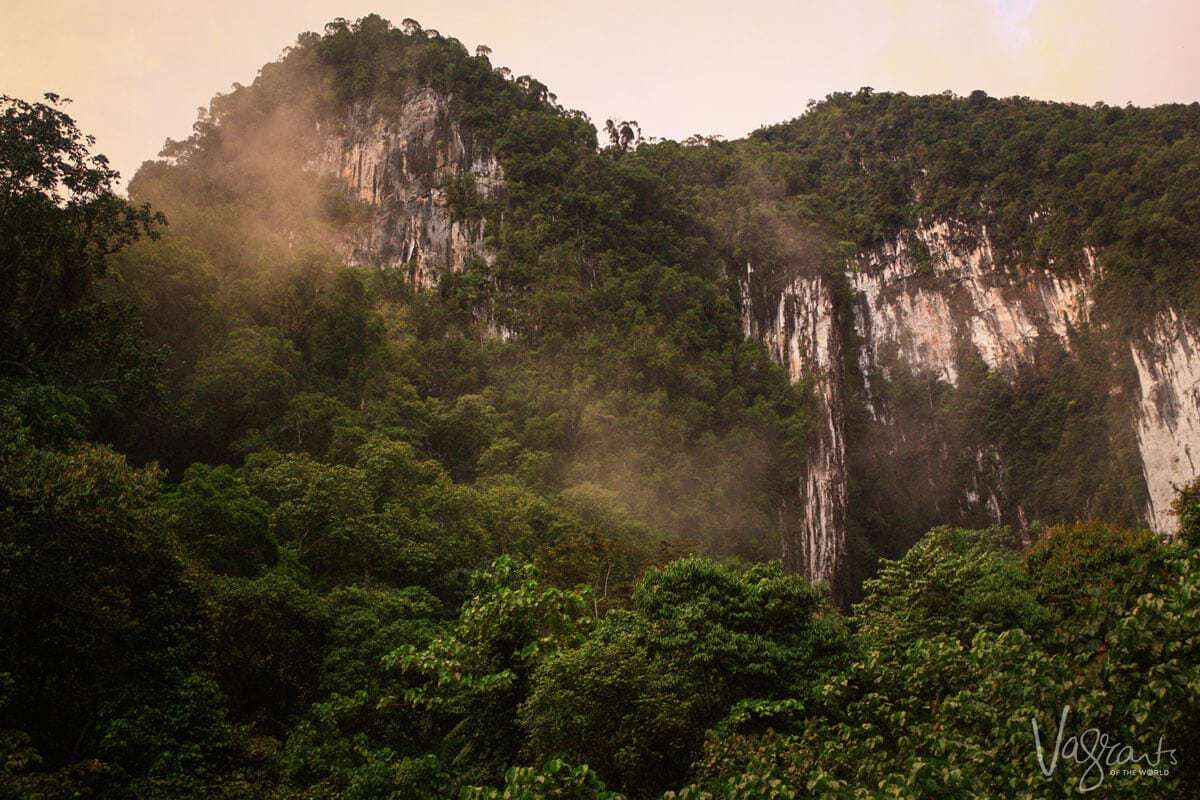 Bako is Sarawak’s oldest national park and also the smallest. At just under 3,000 hectares it is also one of the most interesting. A pristine landscape of coastline and rainforests, it boasts almost every type of vegetation found in Borneo.

Bako is a popular park to visit thanks to the diversity of treks. Treks cover secluded beaches,  jungle streams, dense rainforest, waterfalls and loads of wildlife. The treks range from short easy day walks to full overnight jungle treks. 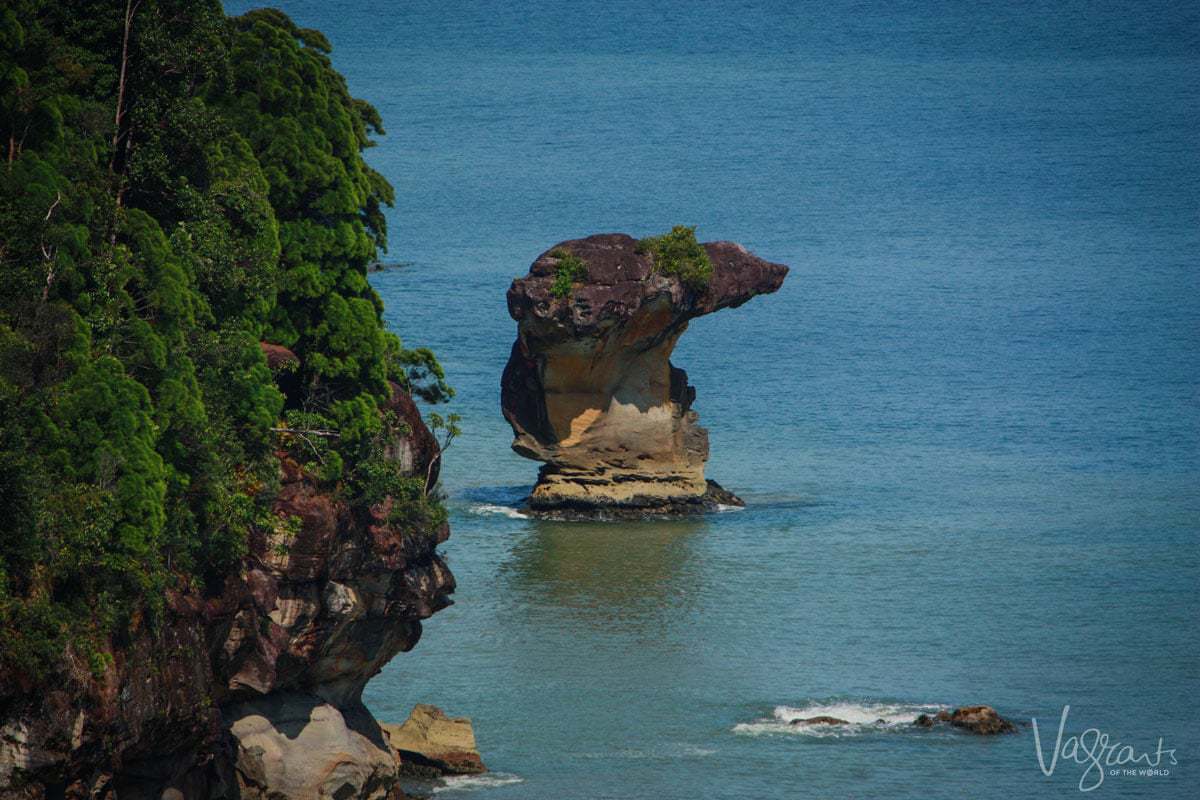 Only 37 km from Kuching Bako National Park is accessible by boat from Kampung Bako (Bako Village). You must register with the Park HQ on arrival. There is a small amount of basic accommodation for overnight stays within the park, but daily numbers are limited so plan ahead.

The Proboscis Monkey is a species unique to the island of Borneo and there is no better place to view them up close, in their natural habitat that Bako. Proboscis Monkeys fill the trees along the beach front without a care in the world.

You can sit for hours and watch them feed and socialise right above your head. It is quite a magical sight. 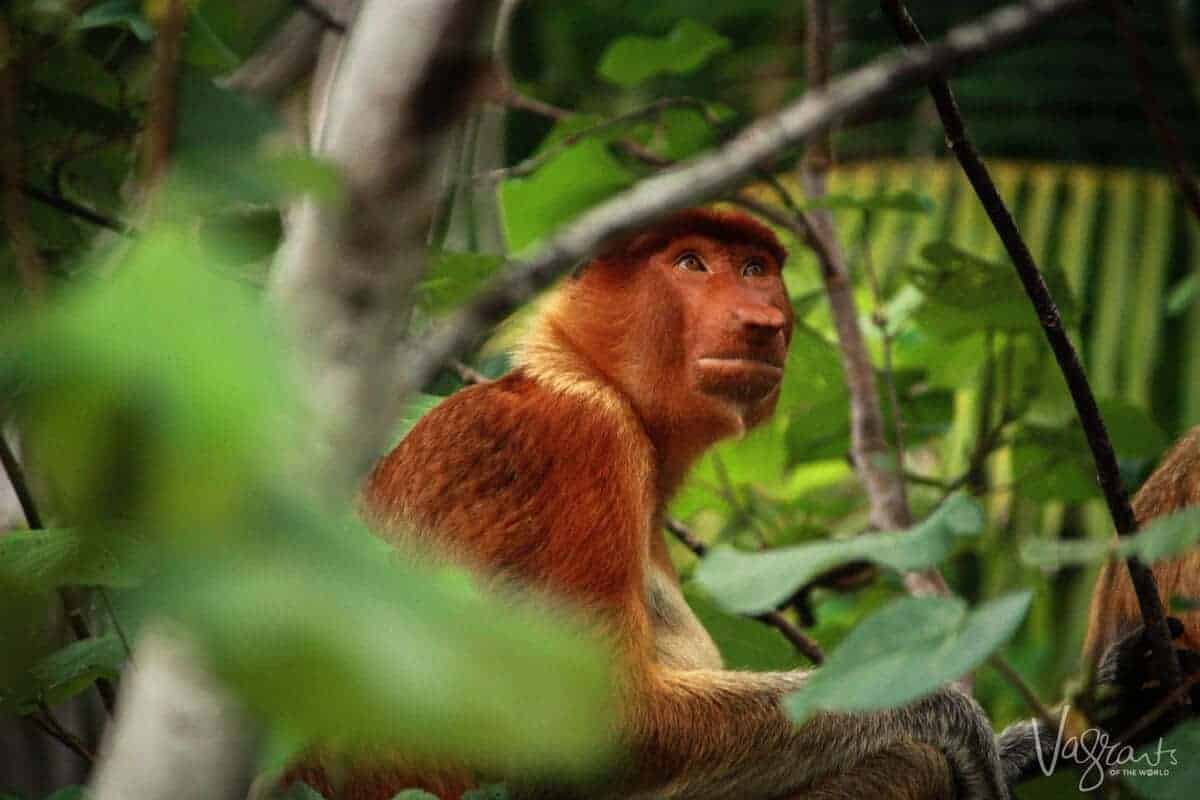 Silver Leaf monkeys can be heard throughout the jungle and Macaque monkeys share territory with Bornean Bearded pigs who roam freely along the beaches. 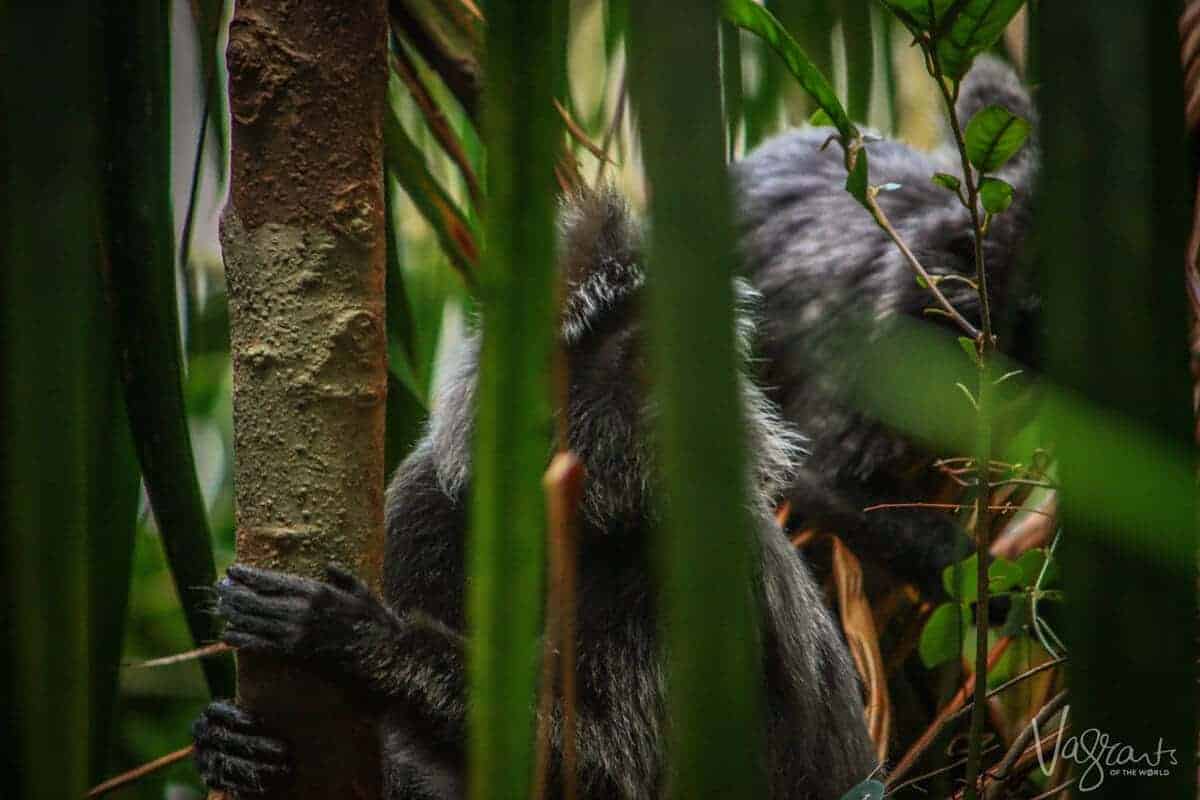 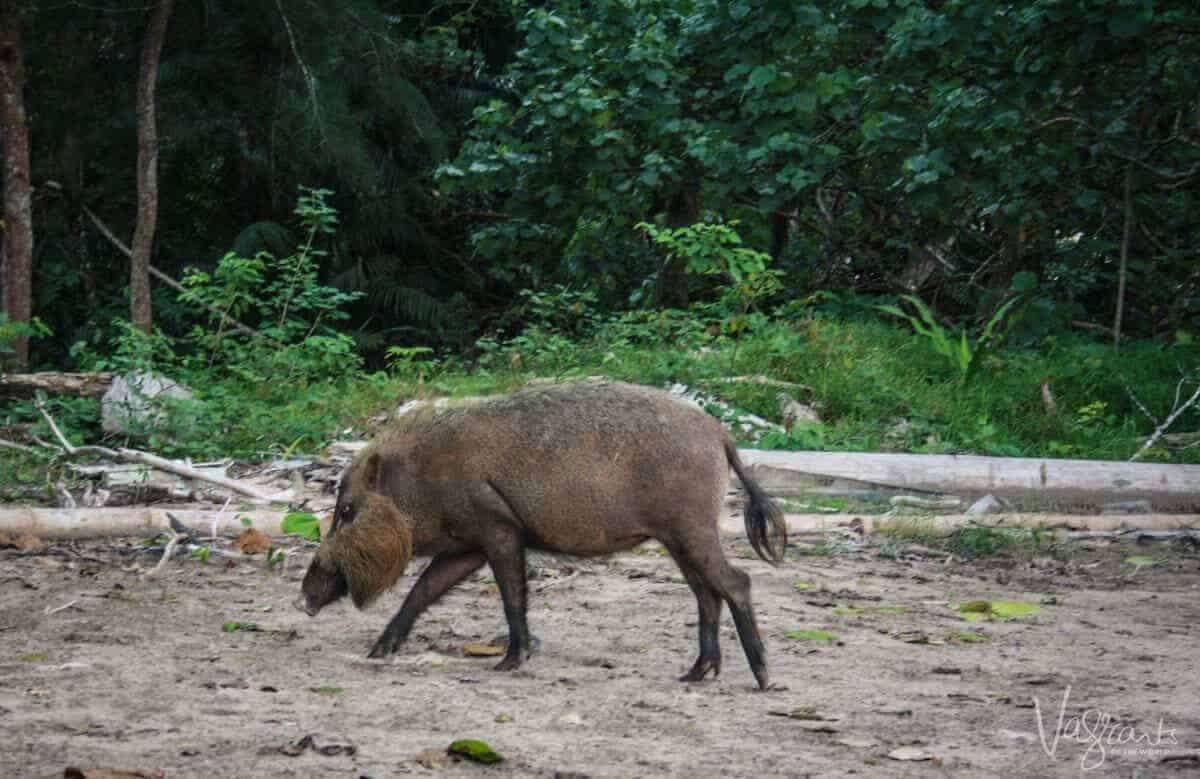 The Nepenthes, also known as ‘Pitcher Plants’ or ‘Monkey’s Cups’ is a carnivorous flower found in Asian tropical regions. The greatest diversity of species is found in Borneo.

The cup fills with rainwater and a sweet fluid secreted by the plant to attract insects to drink. The insect will become stuck in the fluid and eventually drown enabling the flower to absorb the nutrients from the animal.

The flower can grow to hold as much as a gallon of water and have been known to also attract small rodents and monkeys to drink. 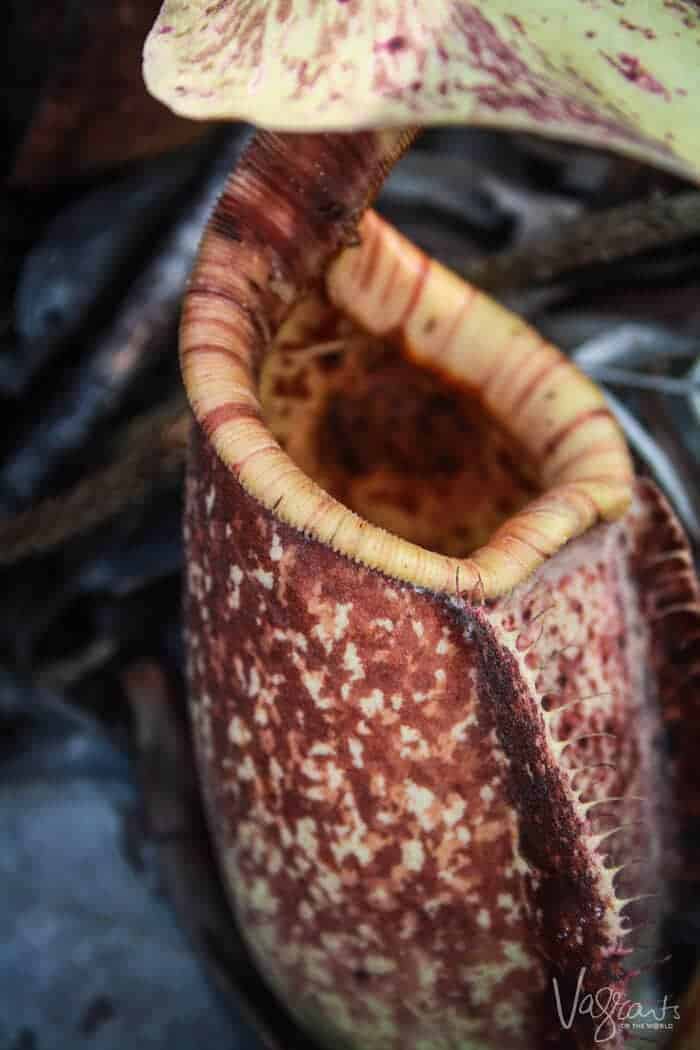 The mangrove systems around Bako National Park are home to a myriad of wildlife and fauna. You can ride through the mangroves by boat from Bako for a closer look at the watery ecosystem. 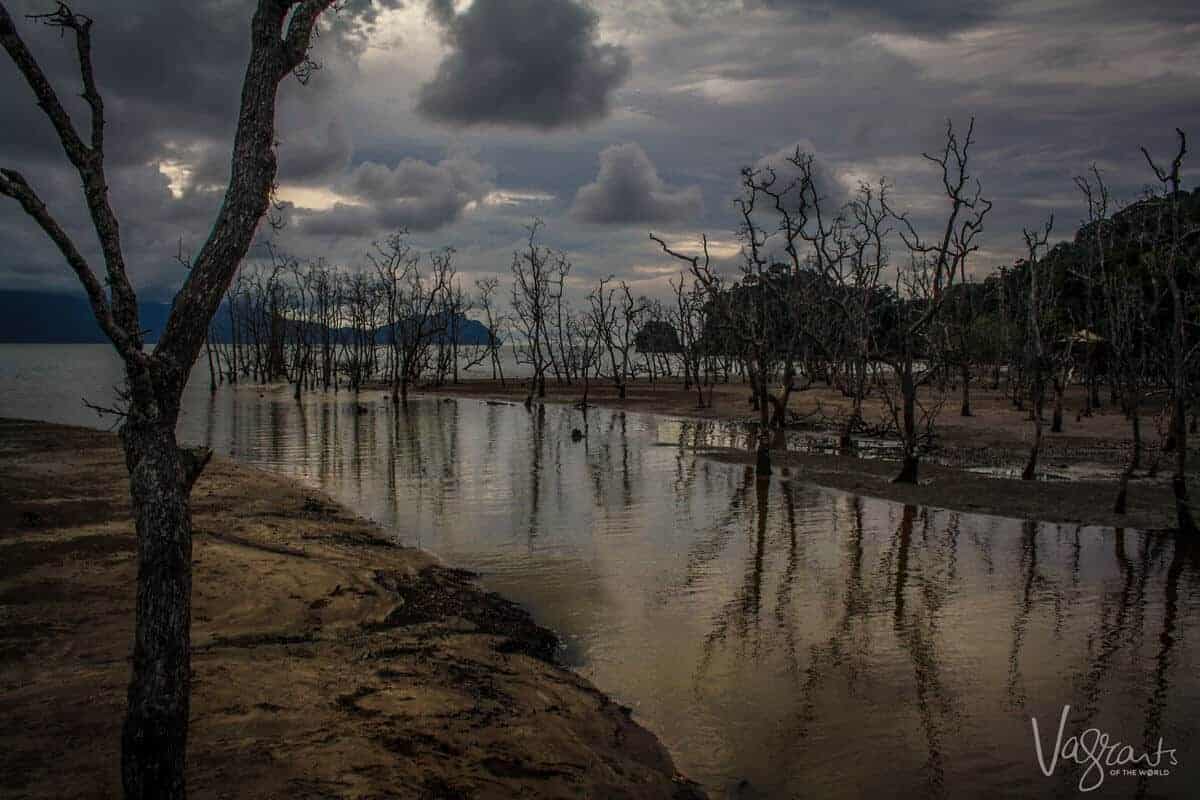 A relatively easy 25 km drive from Kuching, the Semengoh Wildlife Reserve is one of the best places to see orangutans in the wild. The reserve was established in 1975 to care for injured or orphaned wild animals and orangutans illegally kept as pets. 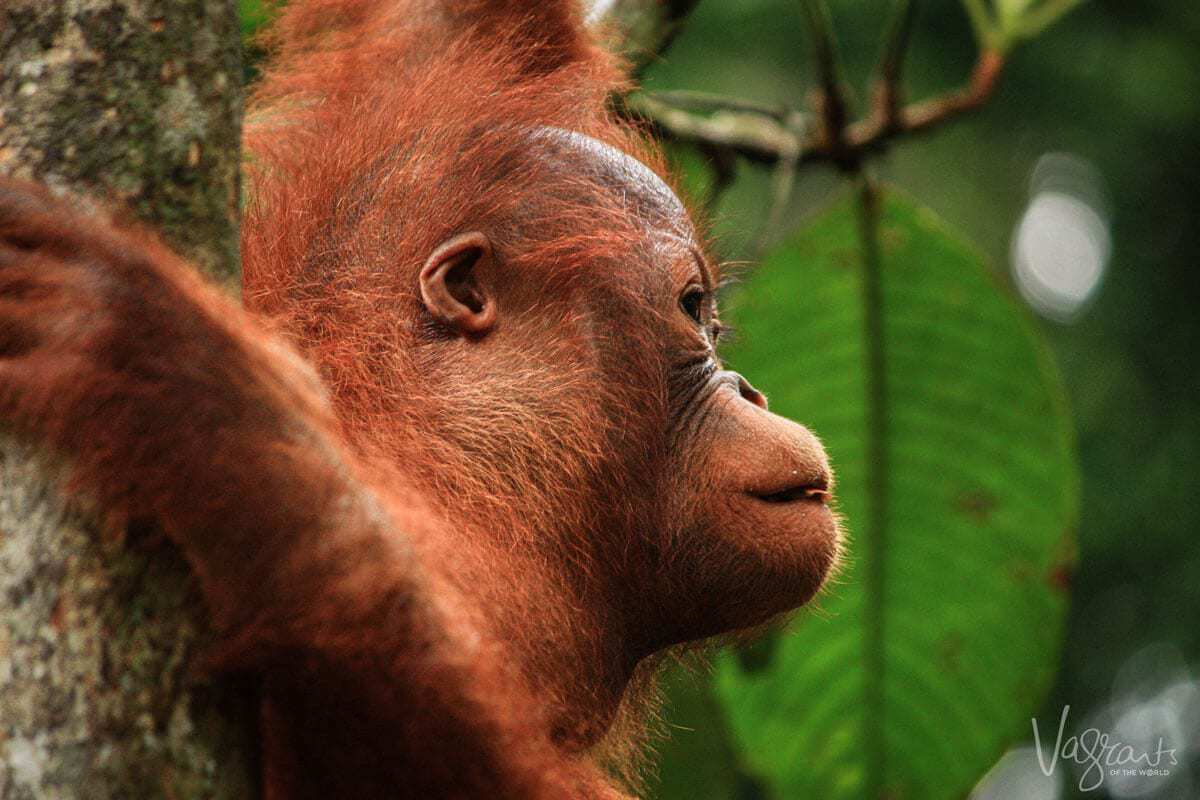 Due to the centre’s success,  so many orangutans have been released into the surrounding forest, the area has reached capacity.  They have since moved their rehabilitation program to another facility to prevent overpopulation. 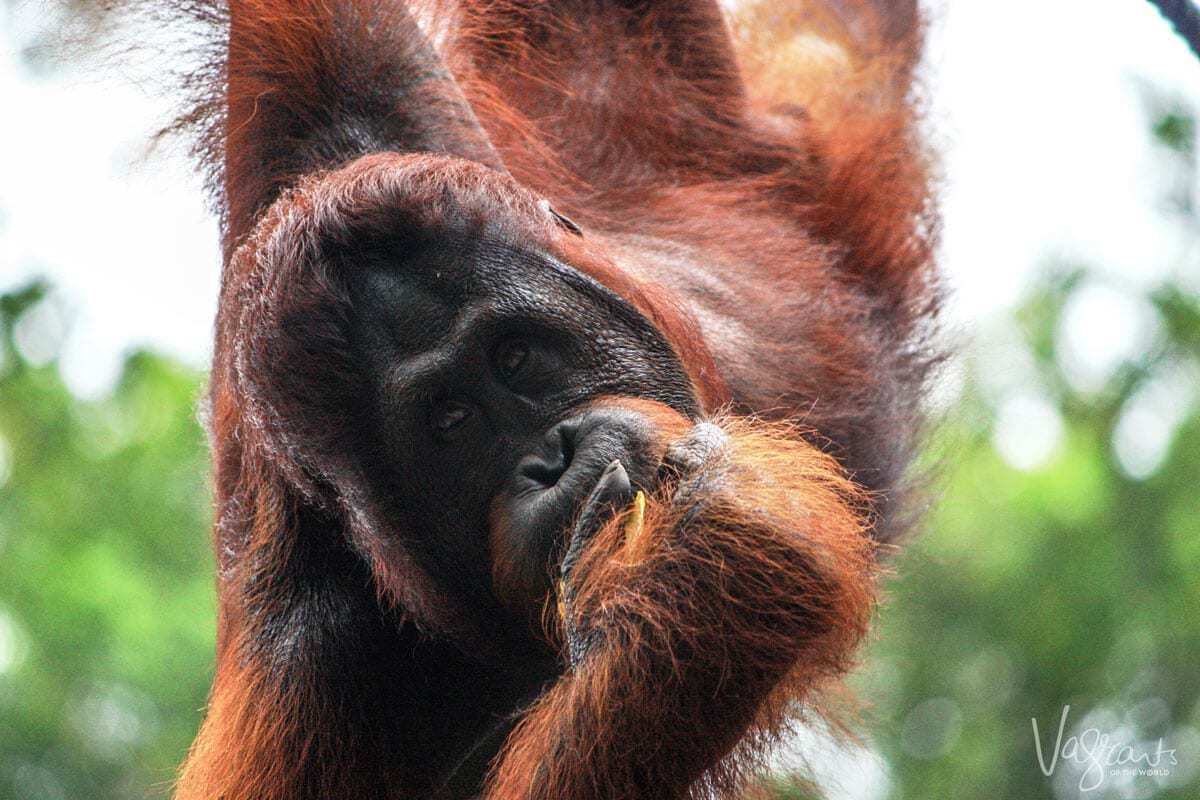 A visit to Semengoh is an incredible experience – to see orangutan, the people of the forest, ranging from tiny infants to large mature adults, enjoying life in their natural habitat. 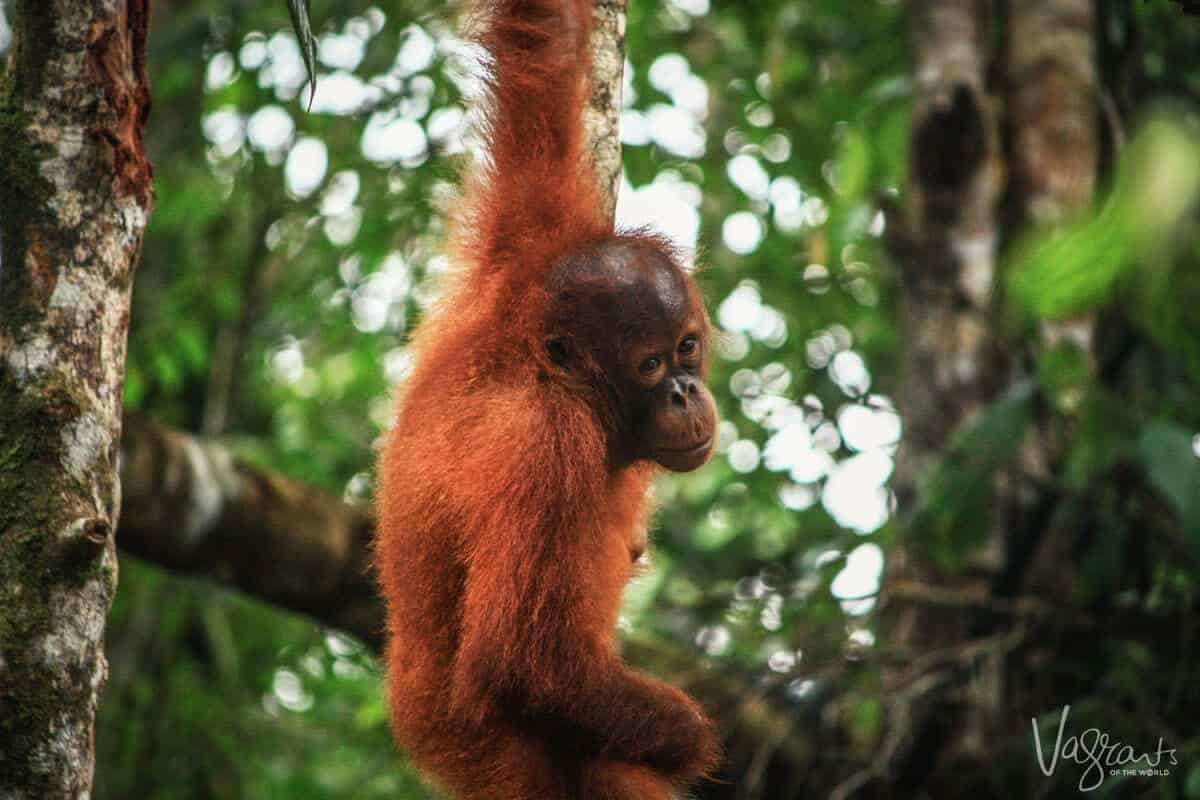 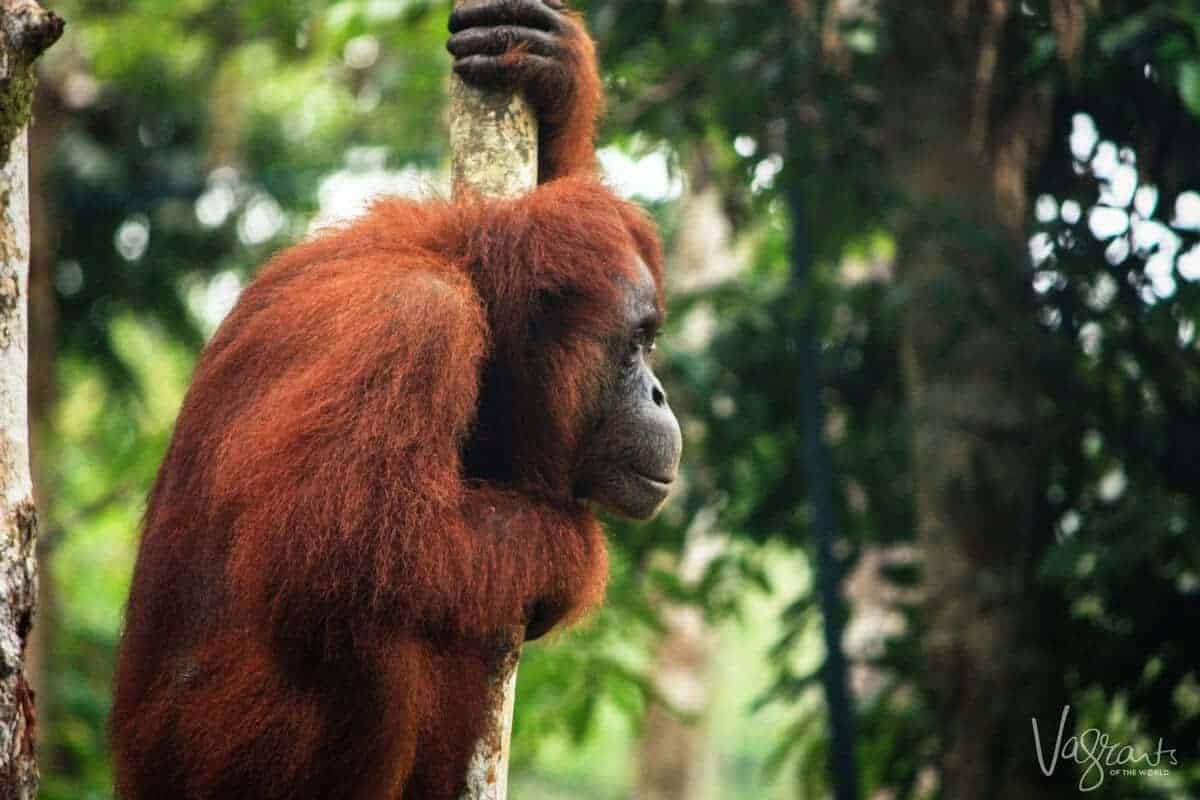 Gunung Mulu national park is a UNESCO world heritage site near Miri in Sarawak. The park encompassing vast cave networks, including the largest cave passage in the world. A mountainous rainforest landscape with magnificent cliffs, gorges and limestone formations and rock pinnacles unique to the area. 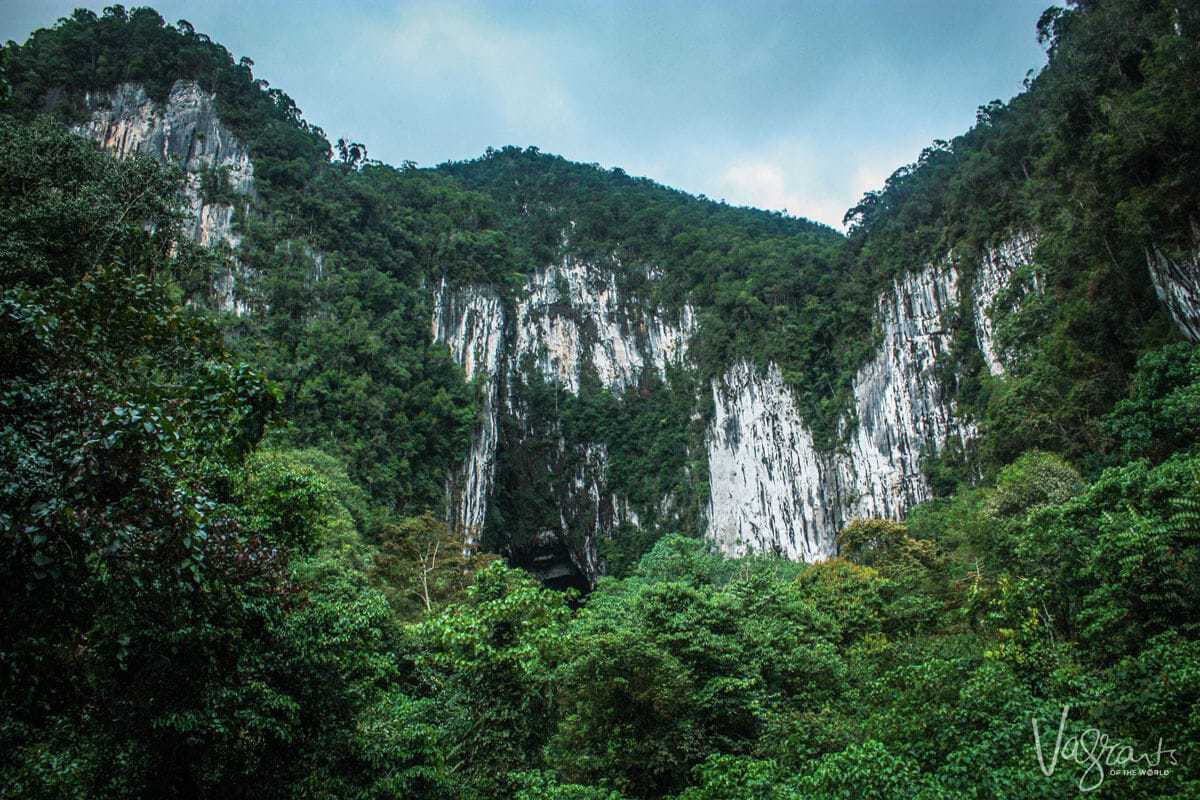 Mount Mulu from which the area is named, is a sandstone mountain rising to nearly 8,000 ft. Gunung Mulu is very remote and only accessible by small aircraft into Mulu or by riverboat and then long boat, a 12 hour trip from Miri. 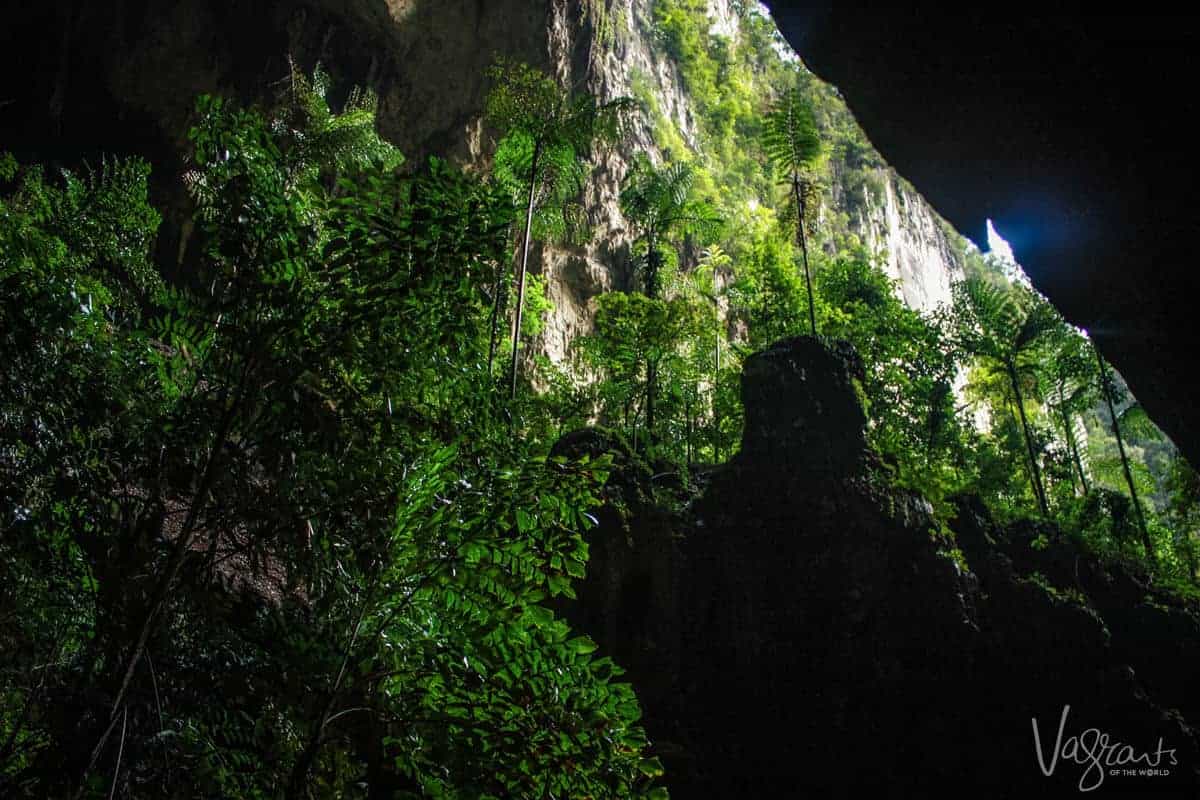 There are a number of easy to visit local caves and rainforest walks from Mulu as well as overnight treks and climbs for the more adventurous. All treks into the National Park must be accompanied by a local guide. 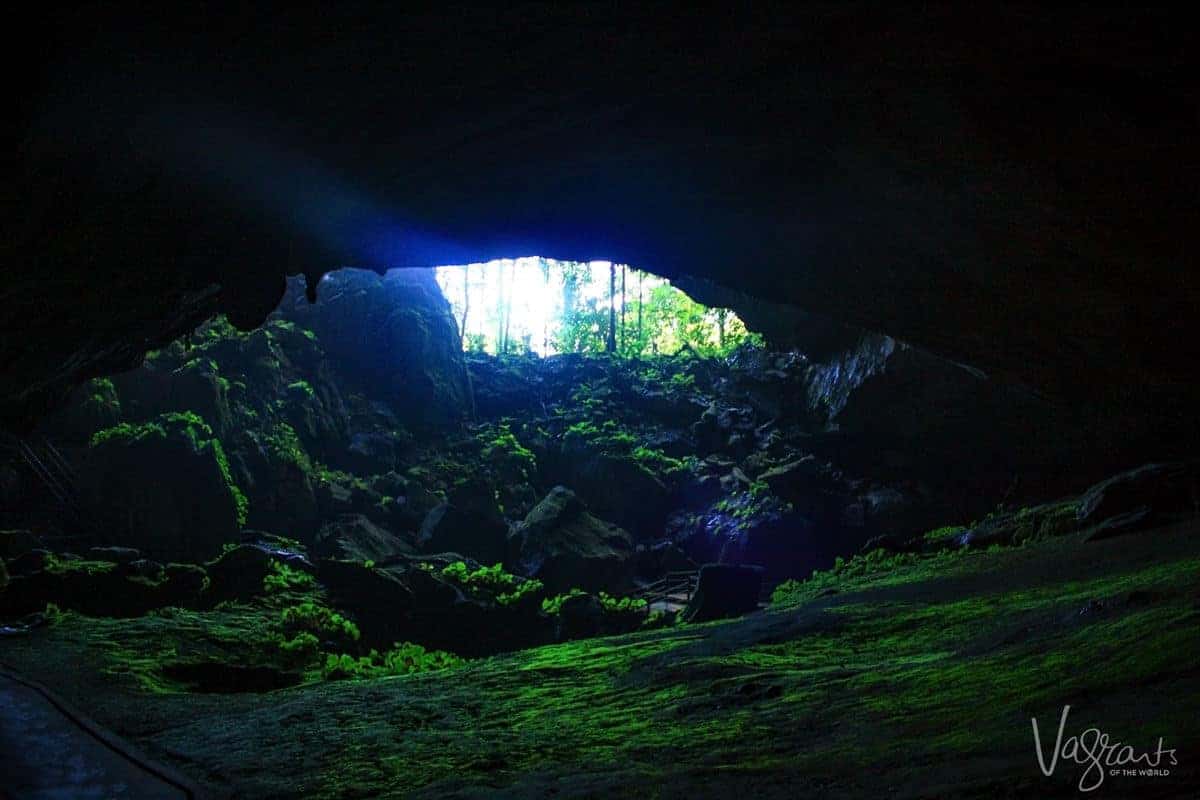 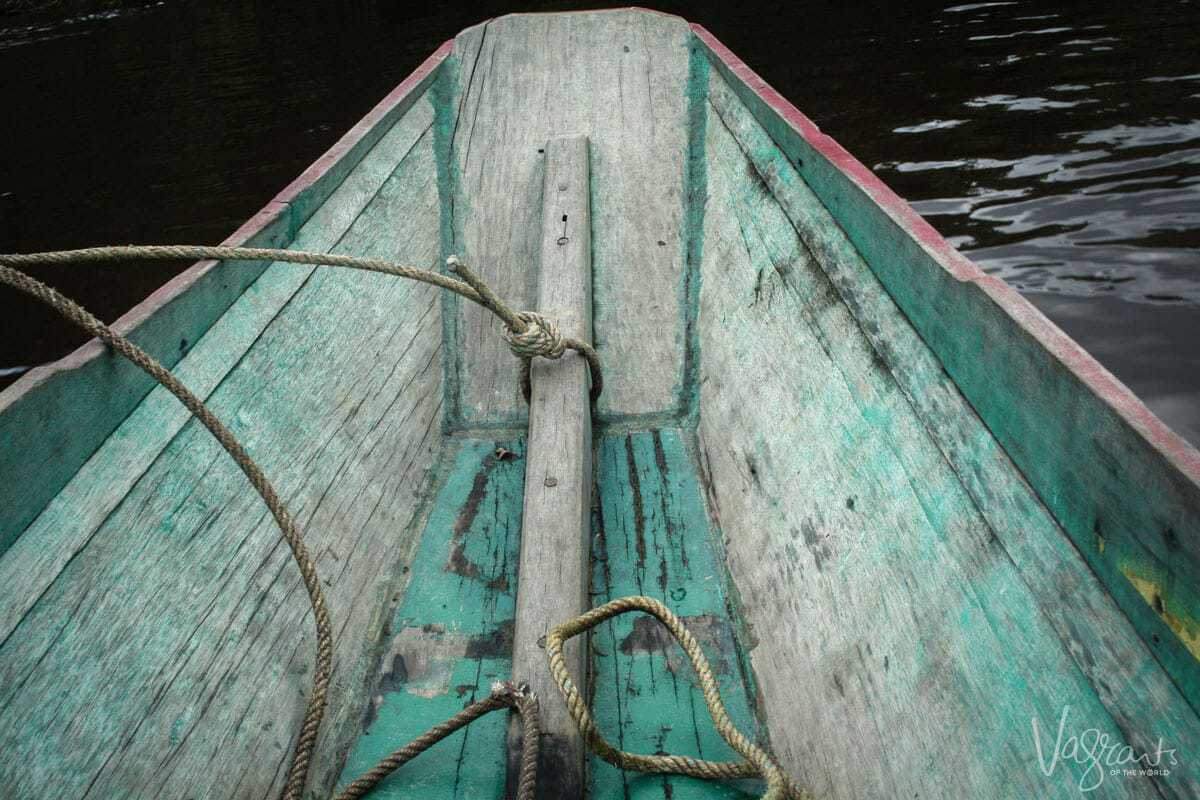 The Headhunter’s trail follows the route taken by Kayan warriors. After paddling to Melinau Gorge the warriors would drag their longboats through the forest for three kilometres until they reached the banks of the Terikan River where they would launch their assault. 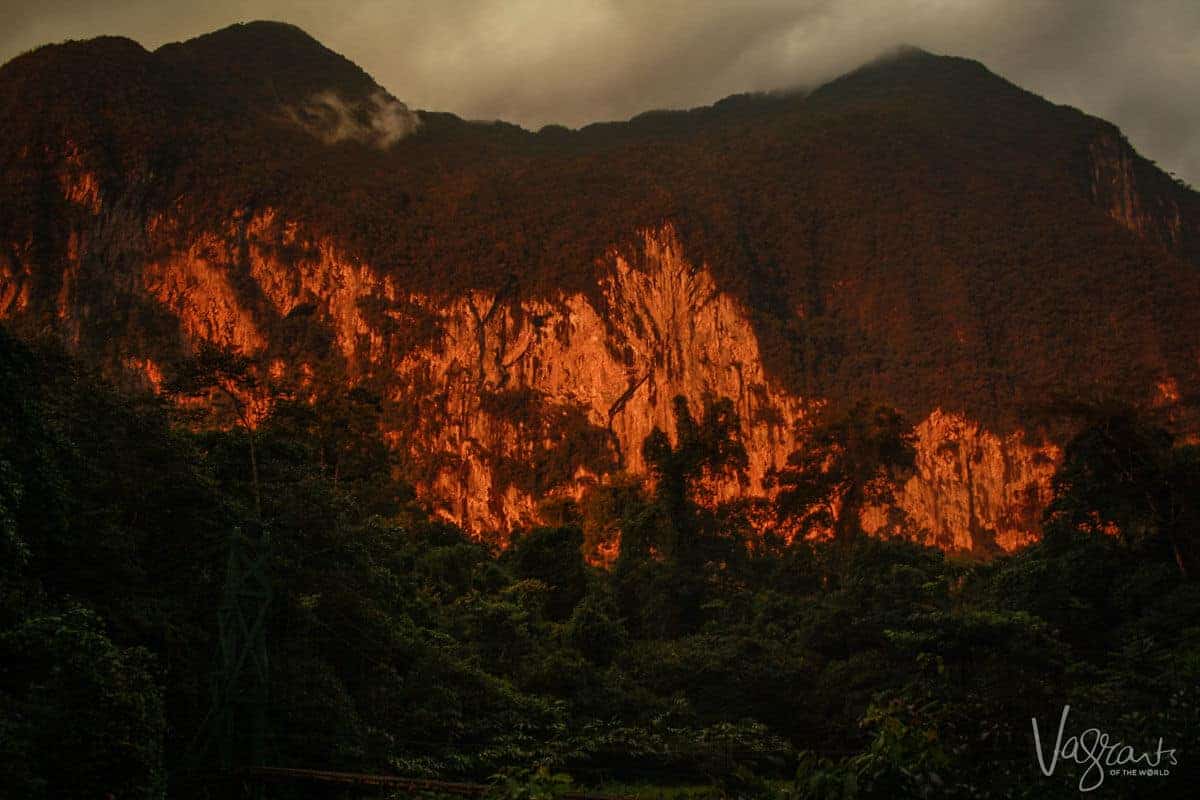 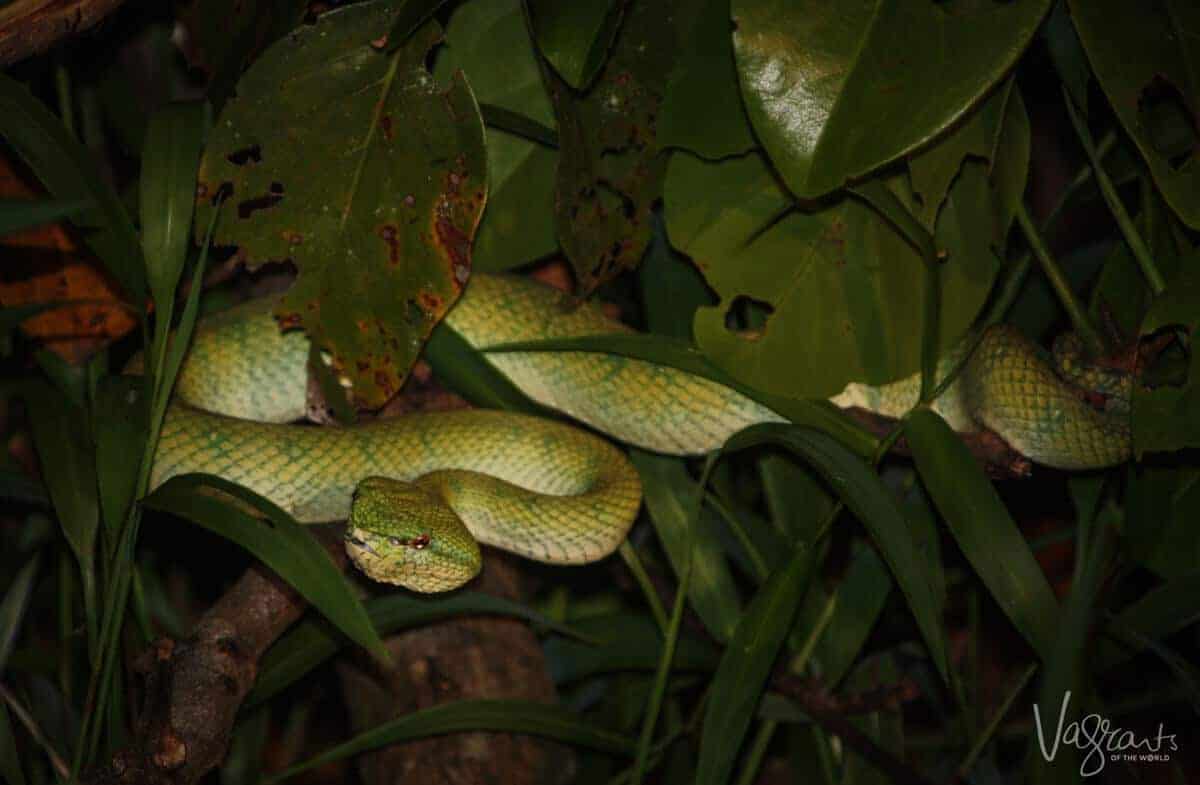 This trek offers an excellent way to experience the rivers and rainforests of Mulu and includes a night at the Camp 5 longhouse. For the more adventurous, this is also the access point for climbing the Pinnacles. 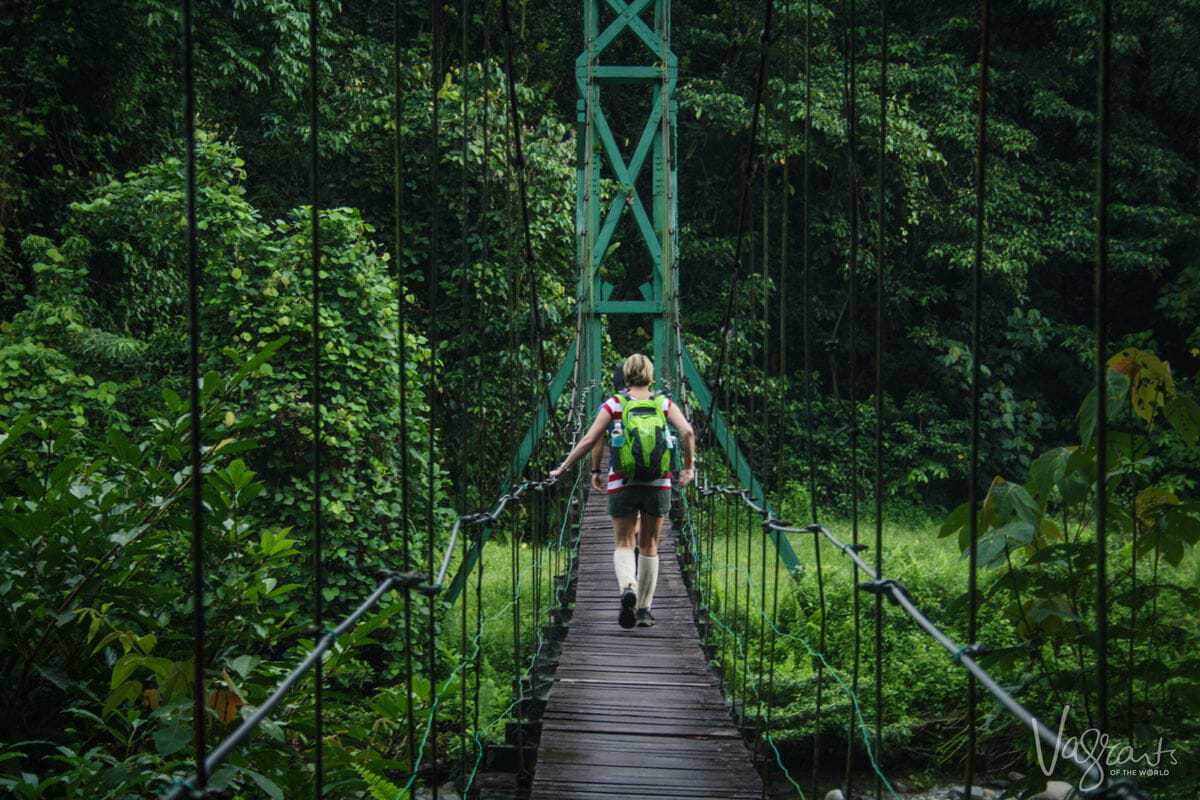 Kuching is the capital of Sarawak and the largest city in Borneo. Situated on the banks of the Sarawak River, Kuching is referred to by locals as ‘Cat City’ from the Malay word kucing. 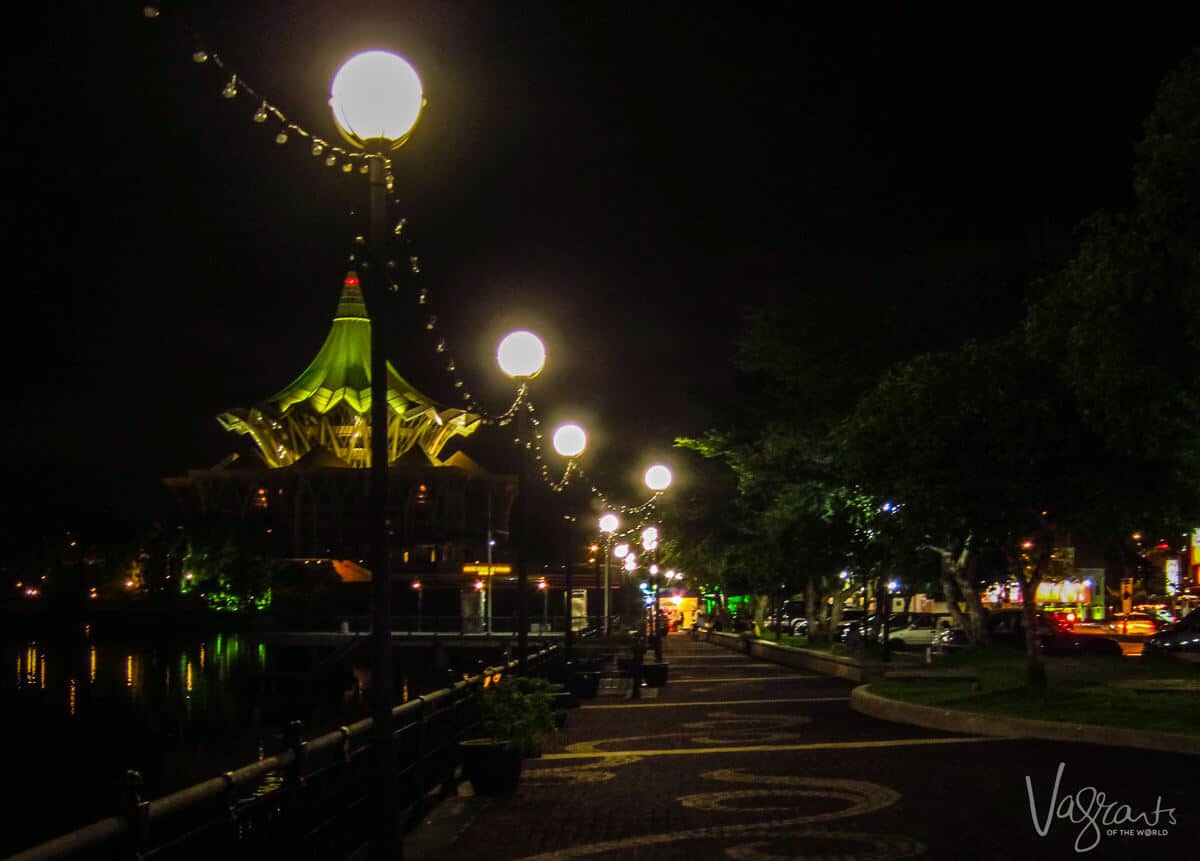 Kuching is known as a food destination and gateway for tourists. It is a lovely cosmopolitan city to catch a breath between explorations into the wilds of Borneo. 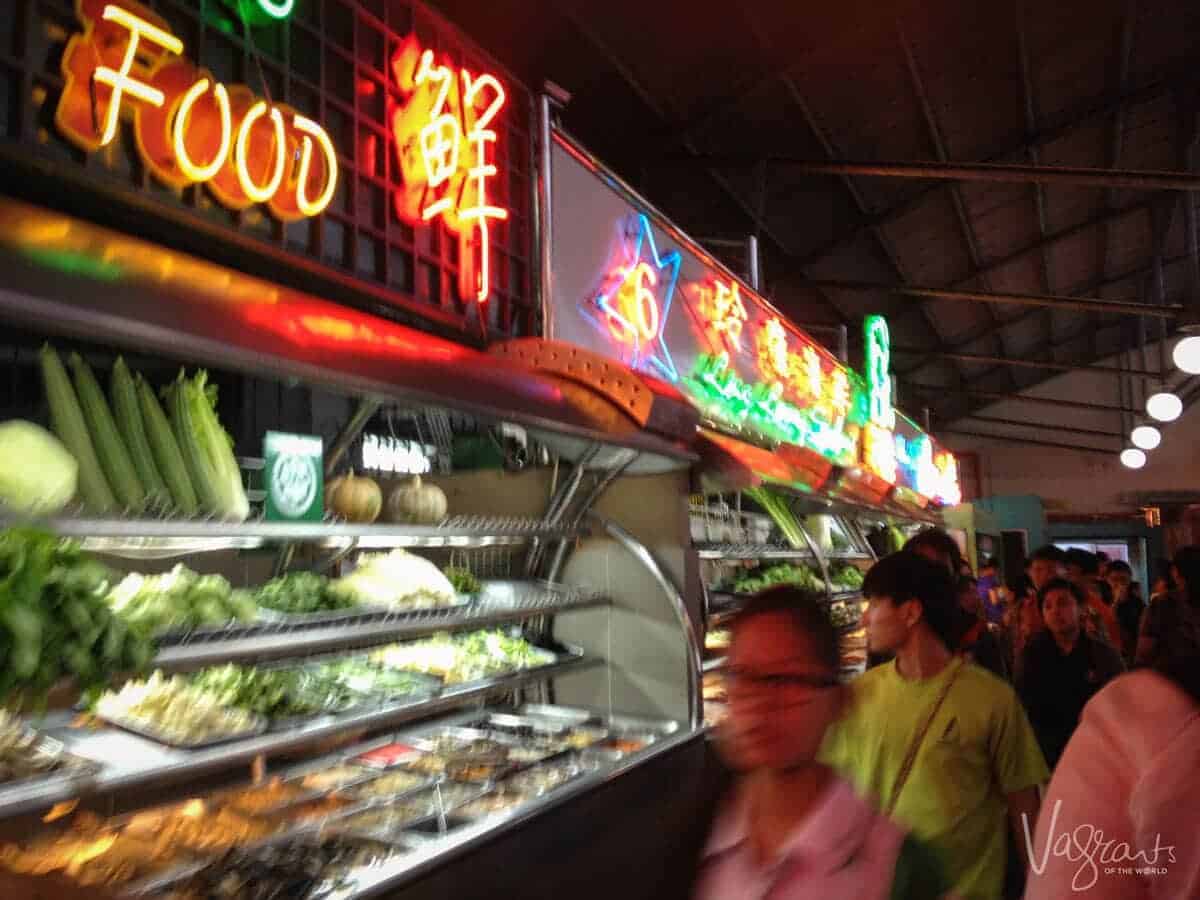 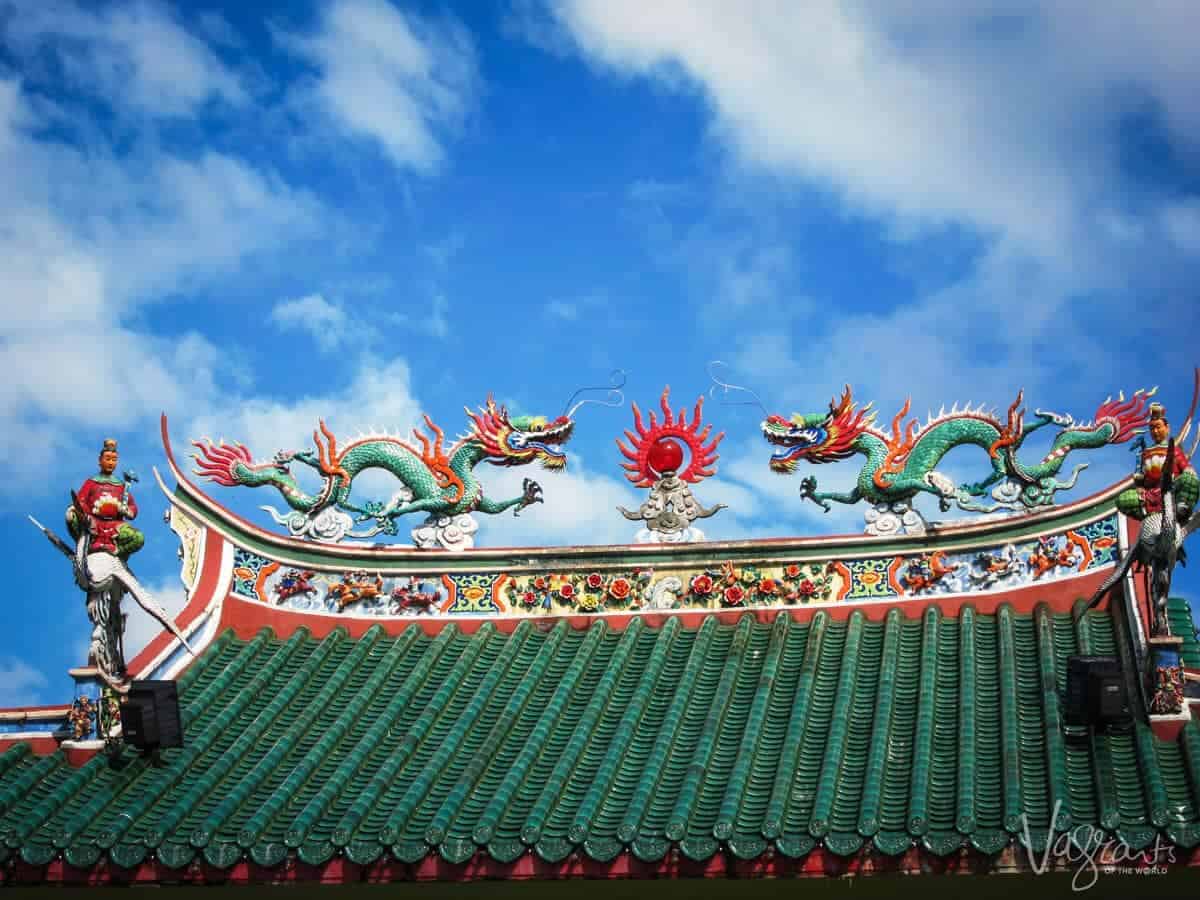 From the capital of Sabah, Kota Kinabalu to the pristine natural beauty of the state of Sabah from coastal to mountain regions, the lesser-visited north or Malaysian Borneo has something to offer everyone.

The northernmost point of Borneo, Simpang Mengayau. Where the South China Sea meets the Sulu Sea.

Views of Mount Kinabalu. The highest peak in Borneo and the highest mountain between the Himalayas and New Guinea. Mount Kinabalu is high on the list for most visitors to Borneo. 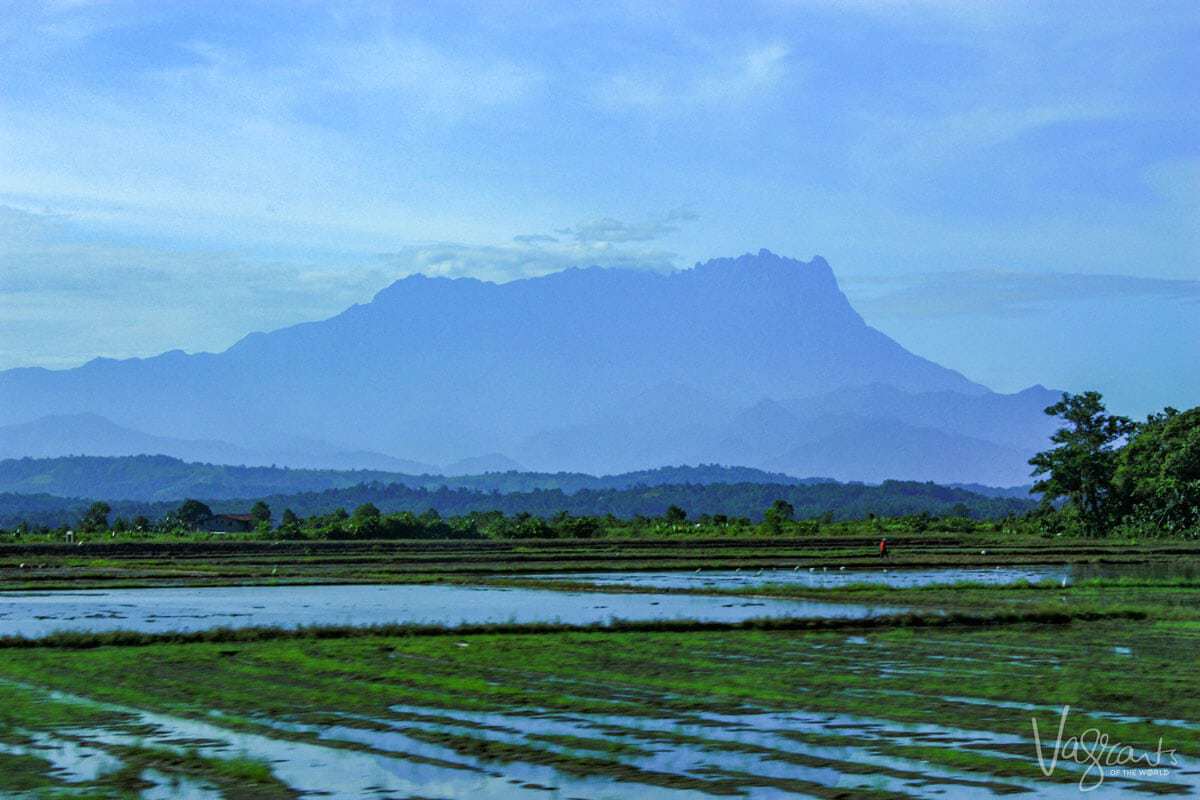 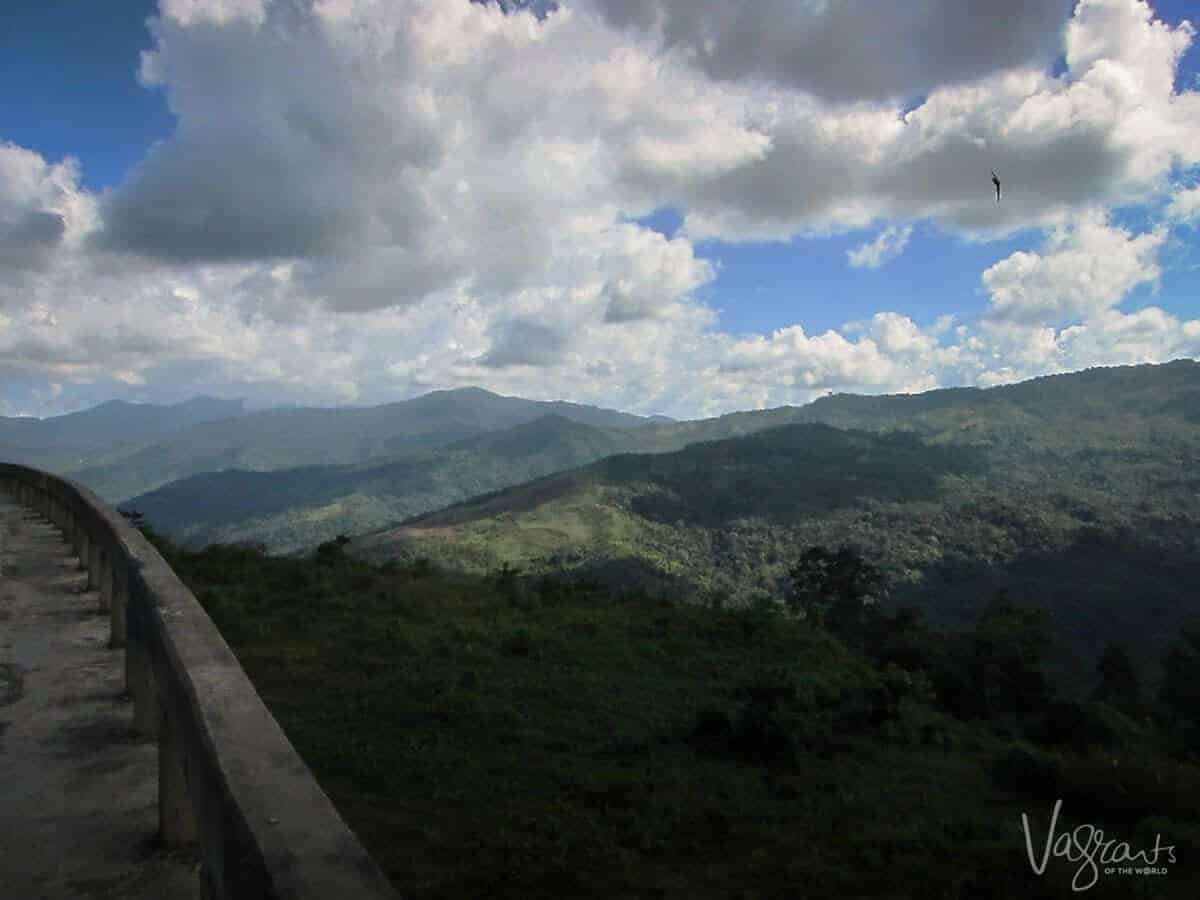 The Rafflesia is known as ‘The Corpse Flower’.  The world’s largest single flower lays claim to its name due to the smell of rotting flesh it emits to attract pollinating insects.

Spanning 3-4 feet wide they will bloom every few years for only 3-4 days before rotting into the ground. It is by sheer luck you will come across these solitary flowers. 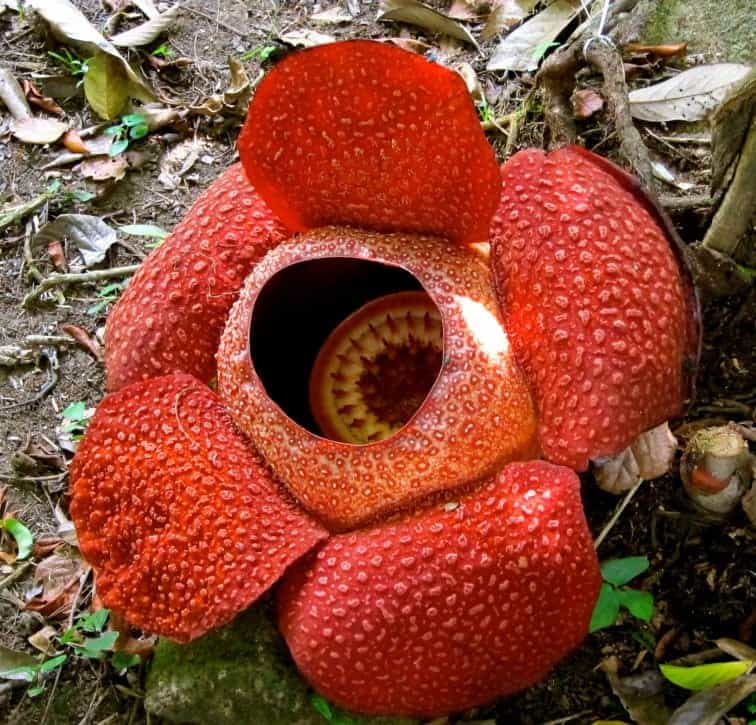 This is only a snippet of what to do in Malaysia Borneo. From exploring the markets of Kota Kinabalu to diving in Sipidan. There is so much to see and experience in Malaysian Borneo, one trip may not be enough. 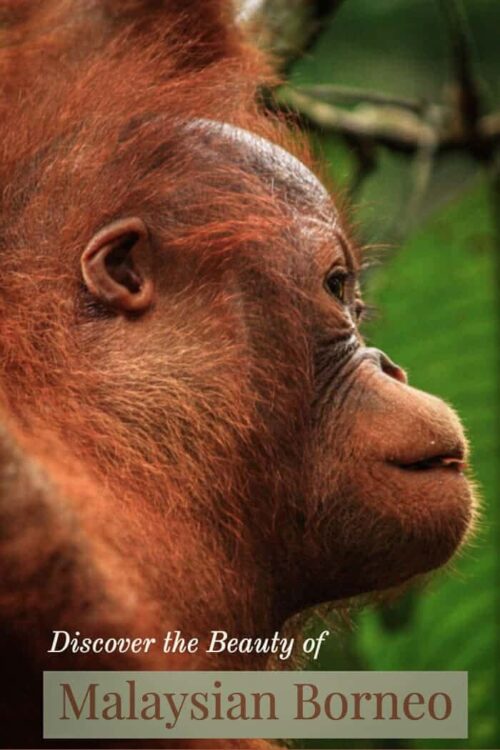 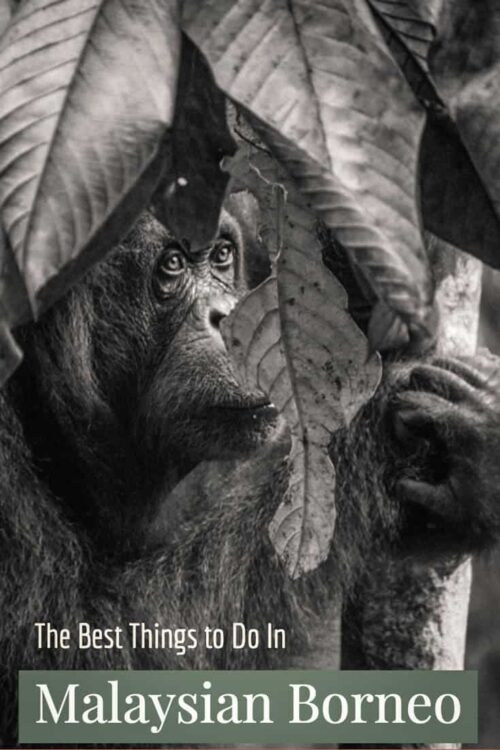