We have had some experience with cockfighting before, but only in the illegal sense.

Sheepishly standing on tiptoes, peering over the shoulders of dubious-looking men in a seedy backyard venue deep in the Mekong of Vietnam. Straining to get a glimpse over small circles of men that would crowd the action in the back of a small village market in the mountains of East Timor while the UN police turn a blind eye.

These fights and the gambling that accompanied them were both clearly illegal and very much men’s business. 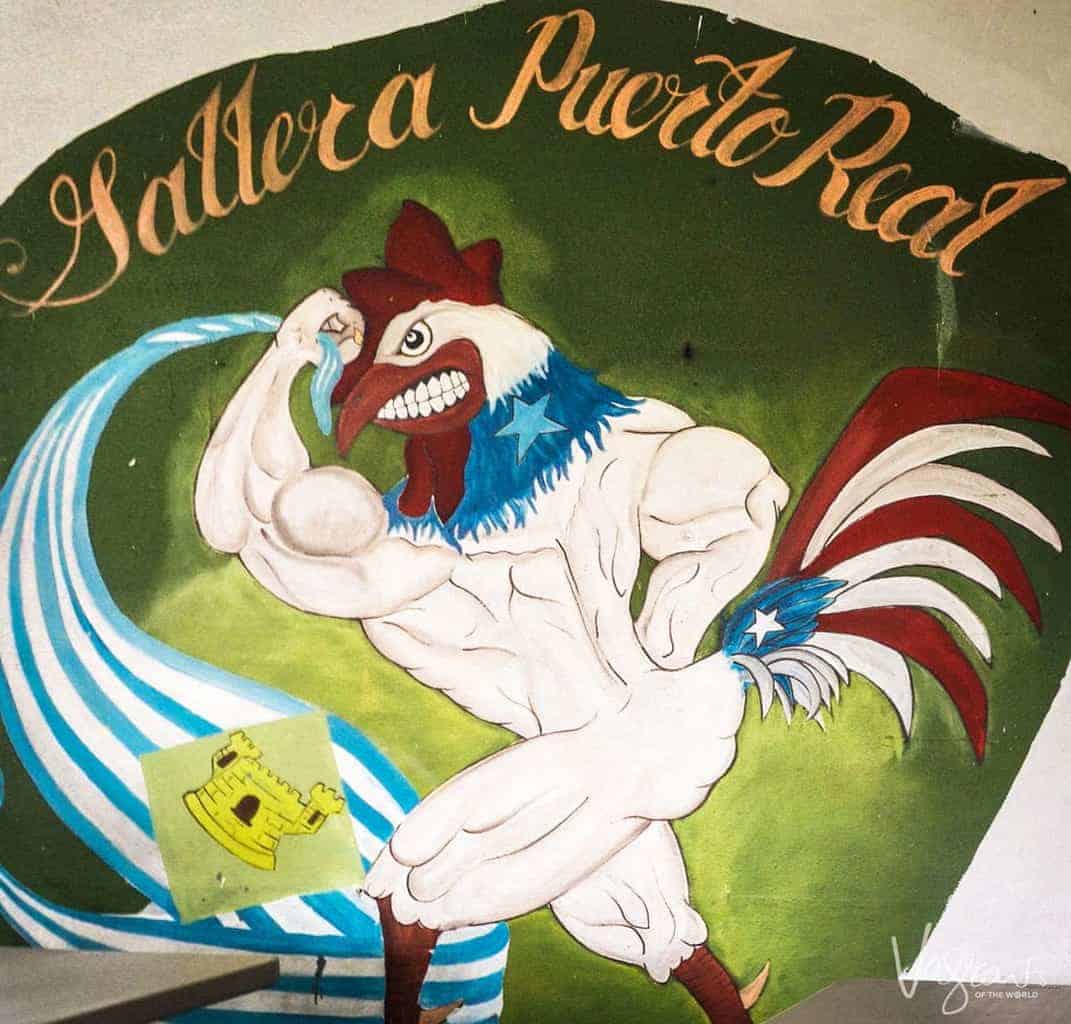 Cockfighting in Puerto Rico is Legal!

Puerto Rico is one of the few territories in the US where cockfighting is still legal. In some cases, it is even run in government-sponsored clubs.

So if cockfighting is your thing (doubtful for most) then head to Puerto Rico because not only is it legal, it’s very organised, sometimes televised and very much celebrated. 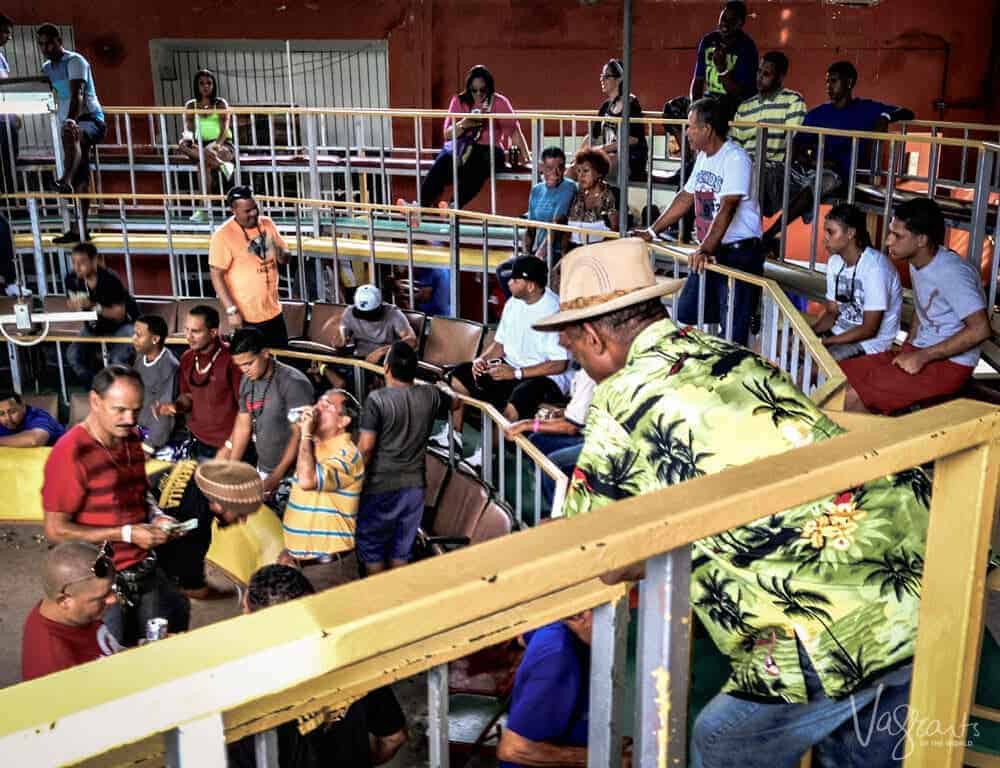 Stadiums all over the big island and outer islands draw large enthusiastic crowds each weekend. While it is still very much a male-dominated sport, it is not unusual to see both women and children attending the events (women get free entry!)

We even suspect that some of the women present in the top stands were much like soccer’s famous WAGS– well dressed, socially aloof but still attentive to the sport. Some may have been groupies of the sports kingpins, either that or it’s just a great place to pick up men!!

The Gentleman’s Sport of Cockfighting

Referred to as the “gentleman’s sport” due to the honour based betting system where men yell their wagers at each other and settle them later. This is a sport that does not discriminate based on class. Spectators from the working classes to the very wealthy will rub shoulders at fights. Organised cockfighting is available to those with only one homebred gamecock, as well as those that can afford a number of very expensive carefully bred gamecocks.

We arrived at the local cockfighting stadium on the island of Vieques on the Sunday of “the big fight”.  This cockfight was advertised all over the island and was attracting participants from Puerto Rico, nearby Isla de Culebra and the US Virgin Islands. There was prize money of up to $5,000 for grabs and was being televised on cable TV. This was a very exciting event.

We arrived at around noon, as advertised. We thought we would be straight in to see some cockfighting but there were still lots of men milling around, carrying small cardboard boxes or wriggling sacks slung over their shoulders.

The woman at the bar told us the fights would not start straight away because the birds had to be weighed and registered. We headed into the arena and realised we had in fact arrived at the most interesting part.

Lines of men with their wriggling bags queued to have their birds weighed in and placed in holding pens at the back of the arena. 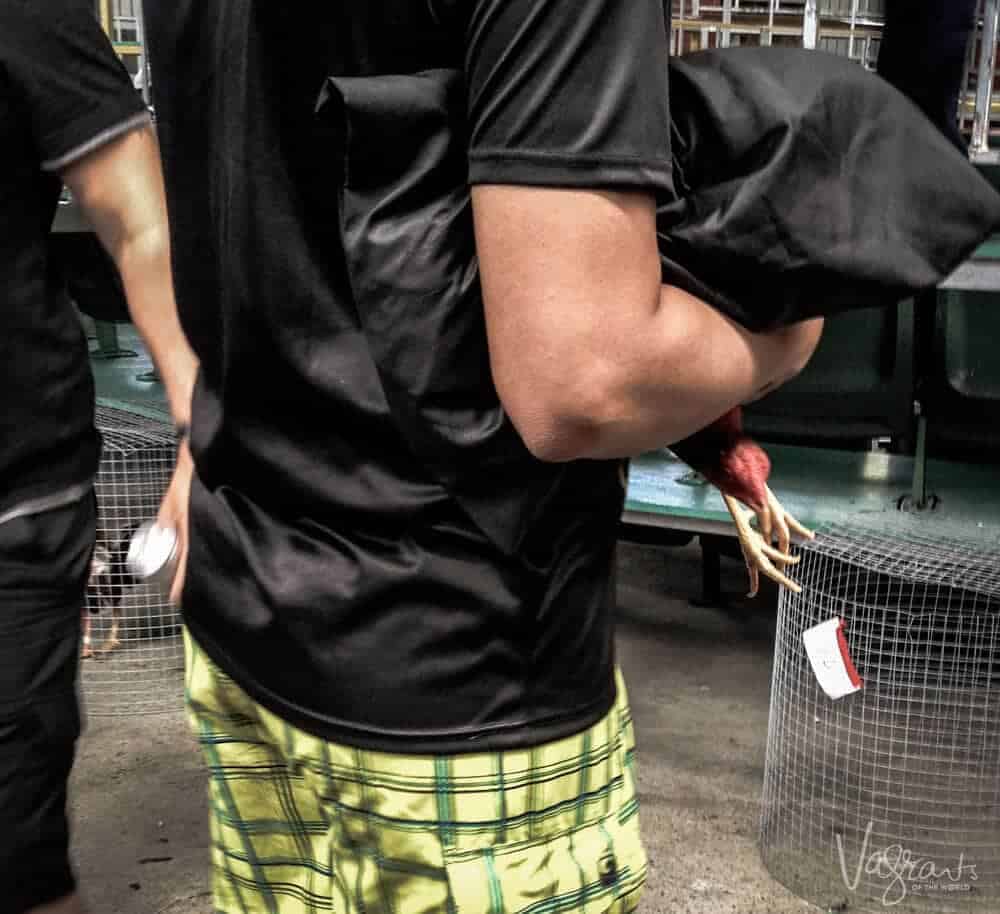 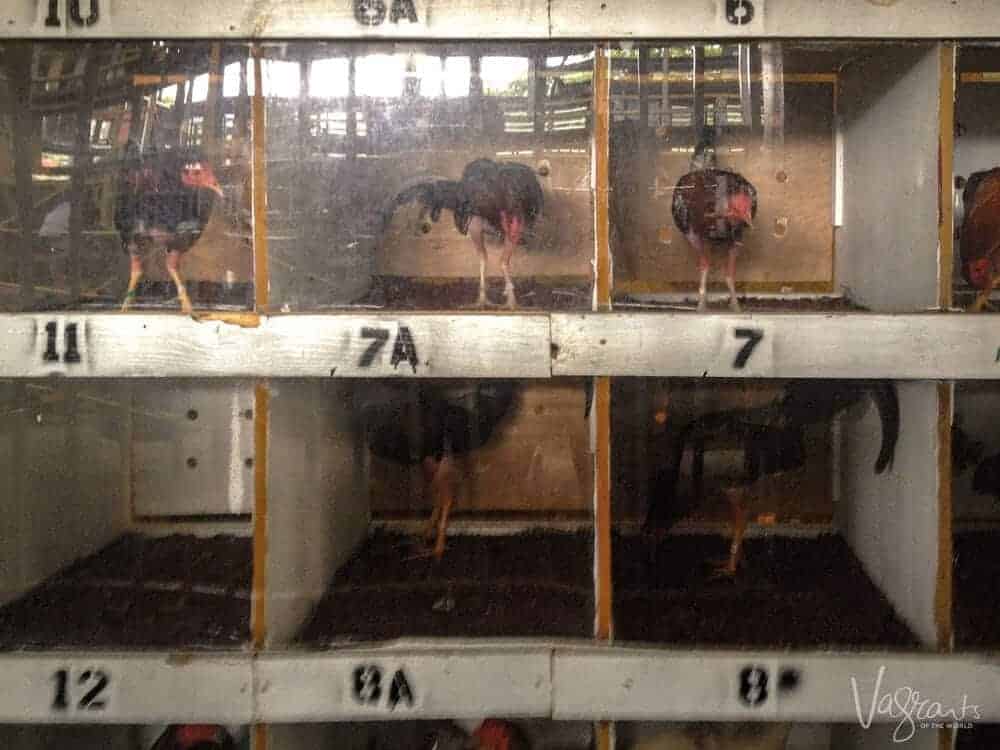 Some of these men are so enraptured by the sport they don what we have now termed “Chicken Bling”.

They adorn their chests with large gangster style gold chains with big shiny gold pendants or large plates depicting gamecocks fighting, it was fantastic.  Thankfully for us, who had no idea what was happening,  people were enthusiastic about it being our first time to a cockfight and were willing to impart as much information to us as possible.

With all the birds now weighed, the men return to the front bar and continue to wait. So we do the same. A quick beer and a sneaky pastilillo and then its back into the arena.

Matching the Gamecocks for Fighting

All the men had run to get their birds from the cages and were now standing in a crowd yelling, holding their birds in the air or comparing birds on the floor. It’s like a scene from the trading floor of the stock market or a really frantic auction. 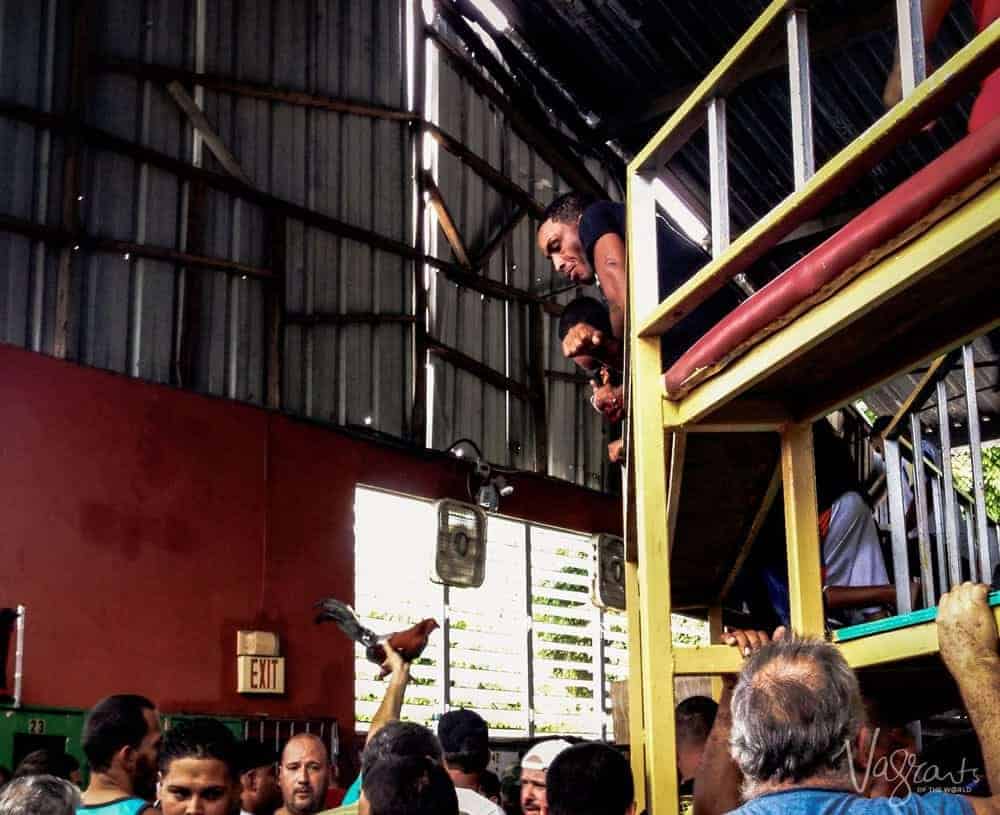 Again, we were grateful that a nice man, who had come from Puerto Rico with five birds he was fighting that day, was very keen to explain to us what was happening.

The men now had to find a suitable opponent for their bird. They yell their weights and wins to try and find a mate to fight, so in essence, it was like an auction. 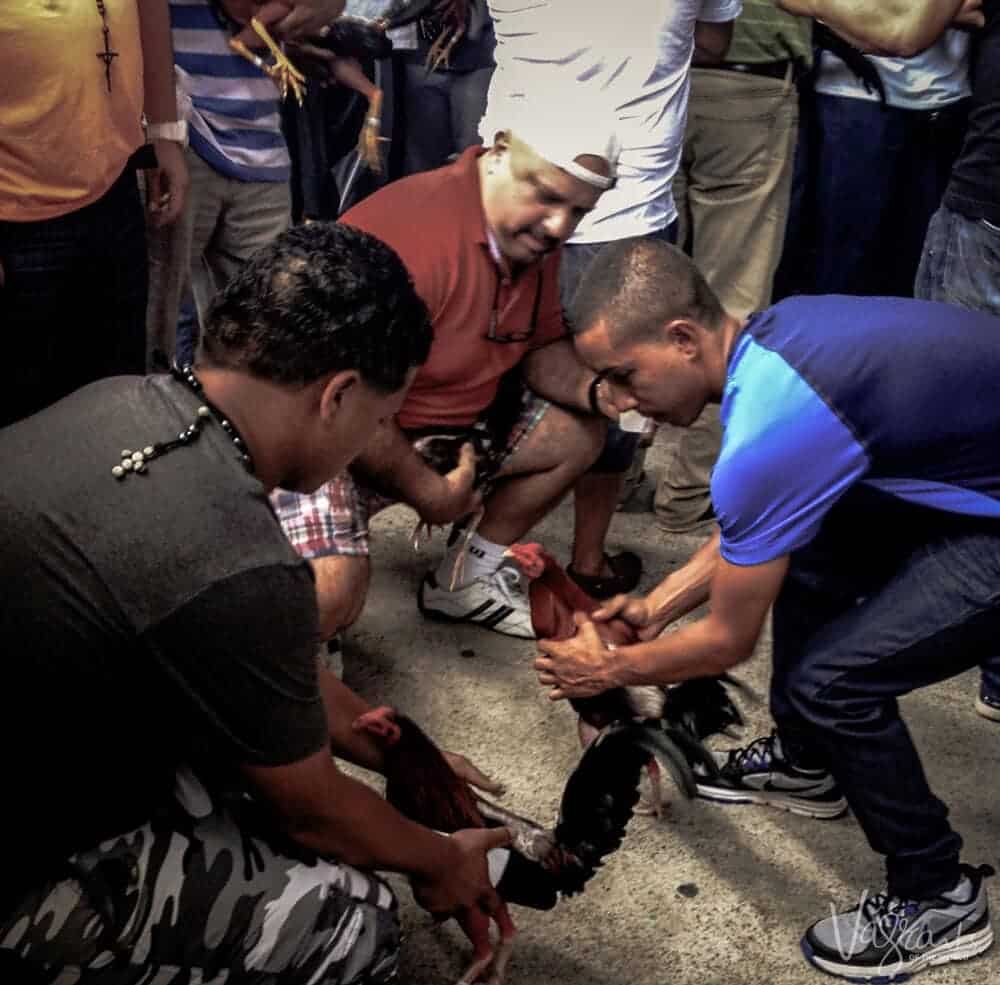 It is during this process that we see some men stuff their birds back in their sacks and leave the arena looking very unhappy. It appears not everyone who registered would fight.

Some birds will not find an opponent if they had won too many fights. For others it was their first fight so would not risk taking on a champ! It is at this stage a betting price or odds are agreed on for each of the birds. 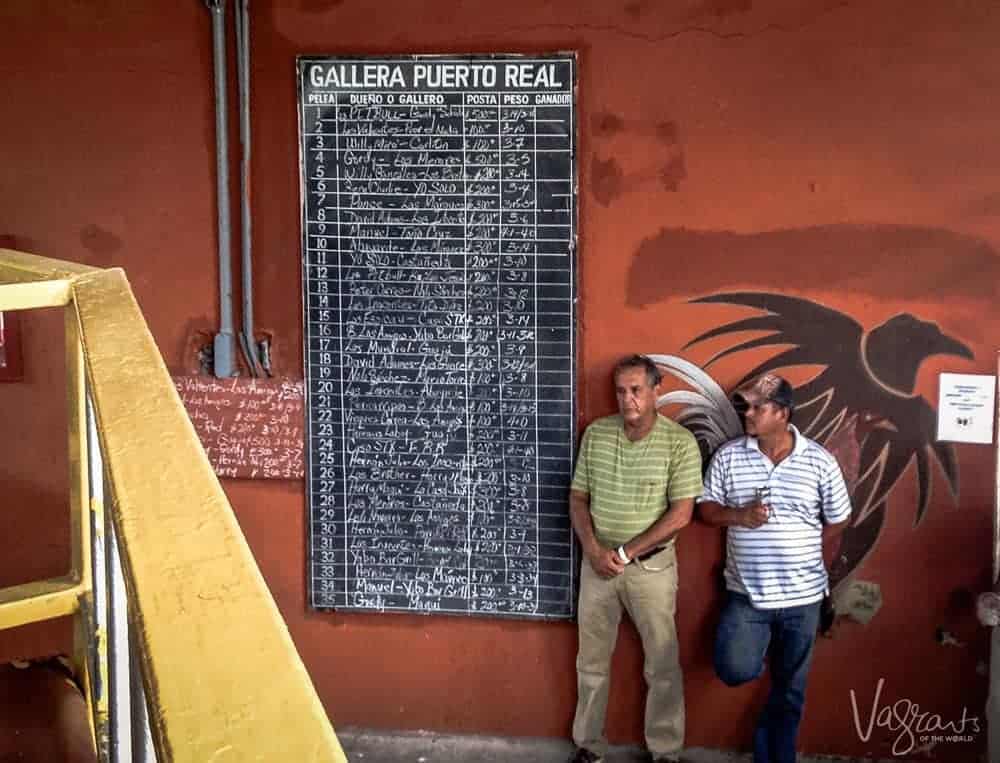 Once the birds are paired,  the men must queue again to register the fighting pair.  They are then placed in cages to wait and have plastic spurs attached to their heels with wax and tape. A bird’s natural spurs are surgically removed to allow for this artificial spike to be adhered.

Some countries use razors for this to inflict greater injury and a faster death to the opponent.

Prior to the fight the underbelly and legs are shaved, feathers trimmed and the combs surgically removed. These birds are meticulously groomed and cared for before they enter the arena.

When the fight begins, the birds are carried into the arena and weighed again in sacks in front of the crowd. Each one is then teased by the judge with a stuffed bird on a stick before being placed in the perspex cage. 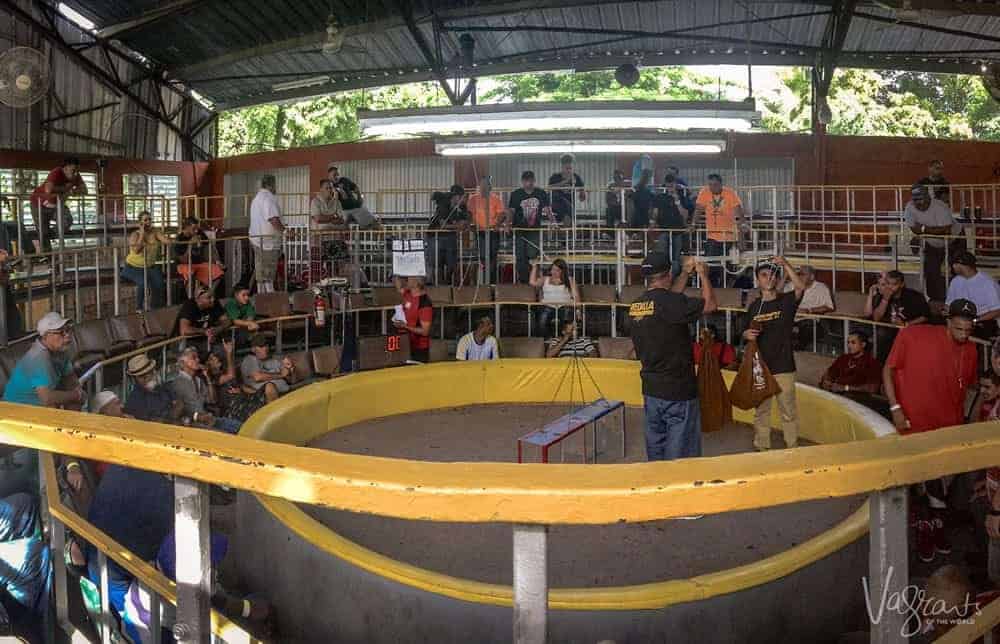 The cocks aggravate each other pecking the perspex that separates them. When they are suitably hyped up, the cage is lifted and the fight begins with a mass of feathers and squawks, followed by a fair amount of blood.

How the Cockfight Works

The owners of the birds will bang the side of the small arena and yell to try to aggravate the birds further whilst others continue to yell bets.

If one bird is down for more than a minute, flees or is killed the fight is won. We stayed for around six or so fights and while the injuries to some of the birds were quite horrific, we saw no birds fight to the death. 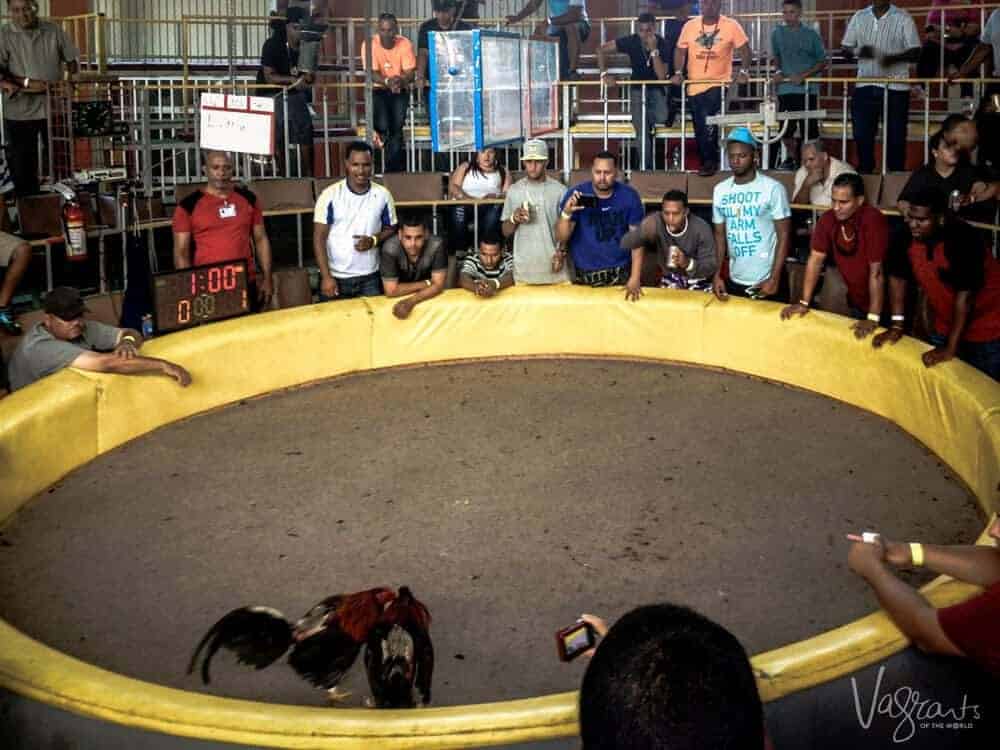 A quick vacuum of the arena between bouts and it’s on again. We were told the fights would continue until around midnight. That’s a big day of fighting and a lot of feathers to clean up! 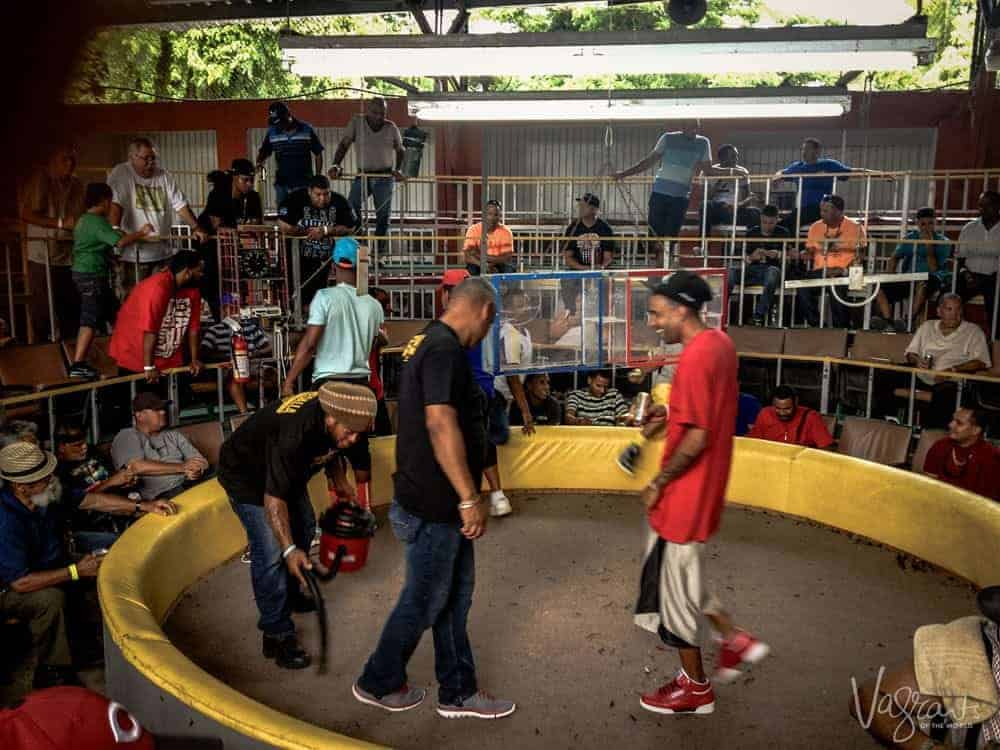 The Culture of Cockfighting in Puerto Rico

For us, it was actually the lead up to the fight. Sharing the excitement, and watching the preparation these men go through for their birds to engage in this unsavoury sport, that we enjoyed the most.

If you have sat through one or more cockfights as a spectator, and you remove yourself from the fundamental cruelty of it. Once you have worked out how it all works, it’s actually pretty boring!

This sport is very lucrative in Puerto Rico with men spending thousands of dollars on breeding gamecock, training and nurturing these birds for as long as two years to prepare them for the sport. And that’s before they’ve even splashed on some chicken bling!

Just ask any Puerto Rican who is enthusiastic about the sport and you will see how ingrained cockfighting is in their culture.
As much as most people see this blood sport as being cruel and outdated, we wouldn’t expect to see an end to it in Puerto Rico anytime soon. In 2010, the Puerto Rican government even declared it, “an integral part of the island’s folklore and patrimony”. 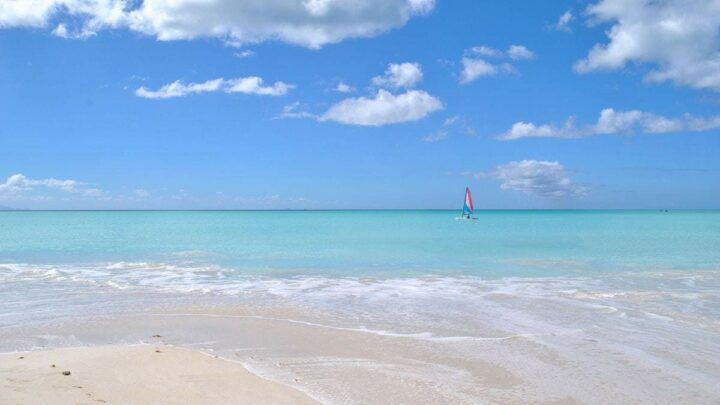 A Guide To Vieques Island Beaches 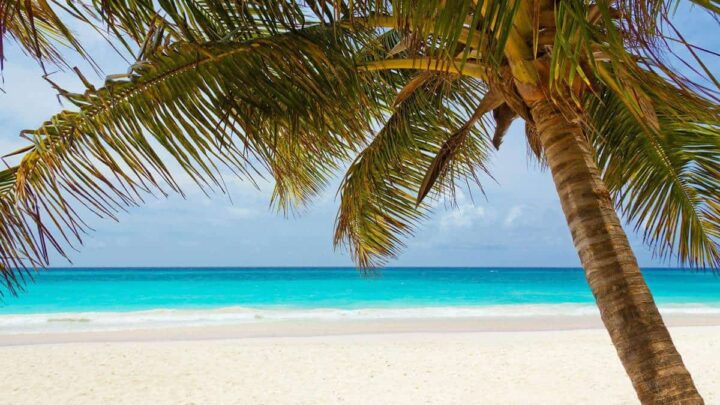 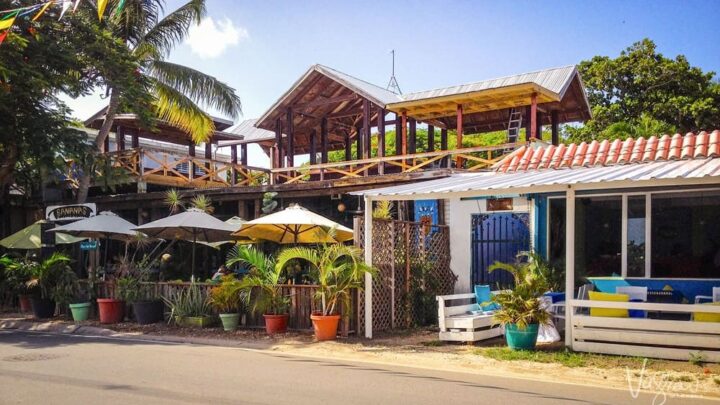 A Guide To Shopping On Vieques Island 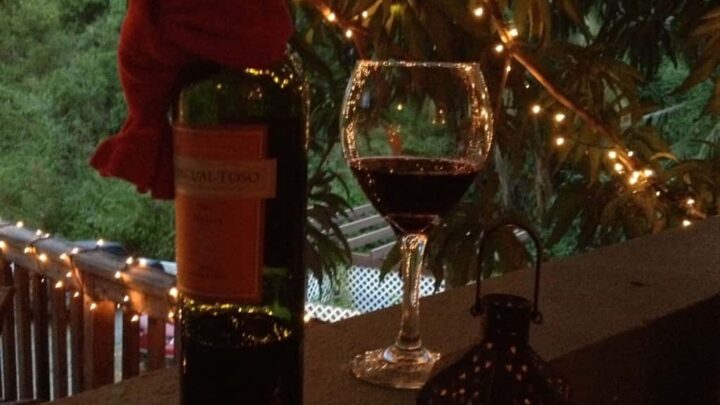 Wine and Dine On Vieques Island 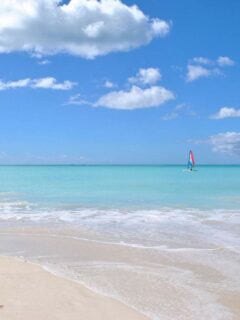 Previous
This Wasn't In The Brochure! The Reality Of Island Living on Vieques Island 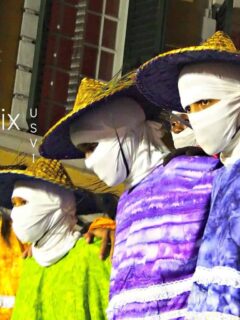 Next
A Weekend In St Croix- US Virgin Islands

I almost had an opportunity to see this - then I thought against it. Love what you've done with Alx's Hueman Theme :)

Its always a tough one when in an another country that has a completely different outlook to your own. I was checking out your Hueman theme today. Its amazing how different they look. May want to pick your brains one day on tips and tricks. Feel free to do the same.

I don`t understand how people find this entertaining. The poor things. : (

Greetings TammyOnTheMove. If it makes you feel any better, left to their own devices the birds will kill each other anyway. This is the Gentlemen's Sport and the tradition goes back to the mists of time. Some say the sport is 6000 years old. What's important here is not the fighting, but the tradition, the knowledge and wisdom that a father passes to his son. I'm sure it would be much more humane to send your youth to die in a senseless war to enforce your ignorant beliefs, then it is to fight birds who would kill each other anyway, right TammyOnTheMove?

Hi Tammy, We felt the same way. At least when we went to the Bullfight in Portugal, even though we don't agree with it we could admire the horsemanship and skill of the Matador. None the less- Good or bad it is always interesting to see first hand past times from different cultures and how they can be so different to what we would enjoy.