10 Most Historic Cities in America to Visit

A relatively young country, the cities of the United States of America are pretty young compared to other cities around the world.

However, there are many truly remarkable historic cities in the US to visit with centuries of history to explore.

Each of these places can trace its roots back to the origin of foreign founders. Whether British, Spanish, or French, these cities have roots in the Old World but have made the New World their own.

If you love architecture, food, culture, and history, these are some of the most historical cities in America to visit.

10 Fantastic Historical Cities to Visit in The US

The nickname, The Ancient City, says it all. Brimming with history, St. Augustine is one of the most historic cities in the US. Founded in 1565 by Spanish explorers, St. Augustine is the oldest city in the nation.

A tour of the Castillo de San Marcos is a must. The old Spanish fort is a fascinating place to explore early Spanish colonial history. Check out the Spanish colonial buildings in the historic downtown. The Flagler College will take your breath away, as will a collection of landmark hotels such as the magnificent Casa Monica Resort & Spa.

Don’t miss a self-guided tour of the Old Jail, the Medieval Torture Museum, and the Maritime Museum. Or try one of the St. Augustine ghost tours for a spooky adventure.

Since the great American story began here in the City of Brotherly Love, any tour of America would remain incomplete without visiting Philly. It may not be the oldest, but it is arguably the most historic city in the United States.

All the major attractions in Philly are awe-inspiring. Imagine standing in Independence Hall where the Declaration of Independence was signed or looking at the Liberty Bell that rang in 1776 to announce the first reading of the Declaration. Both are part of the Independence National Park and are also recognized as a UNESCO World Heritage Site. Take a walk on the “America’s most historic square mile,” which is comprised of over 20 pre-Revolutionary War buildings, to see the city in a new light.

The city is home to numerous art museums like the Philadelphia Museum of Art, the Rodin Museum, the Barnes Museum, and the Pennsylvania Academy of Fine Arts. But there are also lots of Philly hidden gems like the Magic Gardens, the densest collection of street art and murals globally, and possibly the world’s most perfect food: The cheesesteak.

Philadelphia is more than the heritage of its buildings; it is a city where history comes alive.

You Might Also Like: Visiting Philly? We’ve got you covered with the best picnic spots in Philadelphia.

Celebrate the history of America in Williamsburg. Begin with a walk of Jamestown, where the first British colonies were founded. You can view the archaeological remains and take a tour of the local museum.

Colonial Williamsburg is a fantastic place to witness history come alive. Watch people dressed in colonial-era garments and explore historical buildings, including the Courthouse, the Governor’s Place, and Capitol. The Abby Aldrich Rockefeller Folk Art Museum is a fascinating place to learn about the arts and crafts of the era.

Add a thrill to your Williamsburg trip by visiting the Busch Gardens.

More popularly known as America’s Sailing Capital, Annapolis was also the capital of the USA in 1783. The Annapolis History District is where you will find the majority of historically interesting buildings in the city. The major must-visit buildings in the area are the St. Anne’s Church, William Paca House, and the Maryland State House that served as the capital of the new USA (albeit briefly). Its wooden dome is the oldest and the largest wooden dome in the USA.

A tour of the US Naval Academy Museum gives insight into the rich maritime history of the country. You can view models of ships built back in the 1650s. The Hammond-Harwood House is a fine example of colonial architecture with detailed carvings.

Beyond history, there are lots of fun things to do in Annapolis. Check the history books and head down to the marina, and watch the yachts in “ego alley” before heading to one of the local restaurants to enjoy some of that famous Maryland crab.

The birthplace of the American Revolution is rightly called the Cradle of Modern America. The Freedom Trail takes you to the 16 historical sites spread across the city. Take a step back in time to witness amazing history at the Old State House, the Paul Revere House, and the USS Constitution.

Boston is known for its gothic-style buildings, cobbled streets, tree-lined roads, and beautiful skyline. The city hosts other attractions like Fenway Park, the oldest ballpark in the USA.

Go kayaking on the Charles River, and don’t forget to visit the country’s first public park, the Boston Common. Also, don’t forget, leaving Boston without trying the New England clam chowder would be a sin.

With unique landscapes, culture, gastronomy, and a heavily Spanish and Native American history, Santa Fe has everything to make a historic vacation complete.

The Museum of Indian Arts and Culture is a lovely place to learn about the art and of the indigenous inhabitants. The most enchanting attraction of Santa Fe is the Georgia O’Keefe Museum that houses the incredible works of the highly prolific artist.

The Palace of the Governors houses artifacts that map the history of the city. The Oldest House Museum is one of the oldest Spanish properties in the Southwest United States, and the 400-year-old plaza is a hub of activity brimming with history. Take a walking tour of the historic center of Santa Fe to learn about the unique New Mexico architecture and sample some wine at a local winery.

The second-largest city in Texas, San Antonio is one of the first places Spanish missionaries settled. One of the most history-soaked cities in the US, there is so much to do in San Antonio, especially for the history buff.

The intriguing stone structures of the five missions of San Antonio have earned UNESCO World Heritage Site status. Along with the famous Alamo, these historic sites attract millions of visitors each year.

As long as people remember the Civil War, they will remember the Battle of Gettysburg. Tours of the battlefield and associated sites are the primary attractions in Gettysburg. There is a wide range of guided tours to view this incredibly important historic place; we list some more interesting ones below.

The David Wills House, Shriver House, and the Jennie Wade House are some of the small town’s oldest and most celebrated buildings. Lincoln Square is another historic spot – remembering Abraham Lincoln and his famous speech. A walk on the streets of downtown will reveal the rich culture of this town.

Another way to celebrate the history of Gettysburg is to go on a culinary journey. Taste the Civil War-era dishes at some of the popular eateries here. The country surrounding the town is one of the largest apple-producing areas, so there is excellent apple cider and pie to be had here. Gettysburg promises experiences you won’t want to forget.

Charleston is nothing short of enchanting, with over three hundred years of American history is preserved in this fascinating city. More than any other historic city in America – Charleston offers an old-world ambiance like no other.

Some notable historic buildings are the Battery, antebellum mansions, and numerous historic churches and museums spread across the city. To appreciate the beginnings of the Civil War, Fort Sumter National Monument is the place to visit.

The Cooper River Bridge, a 2.5-mile suspension bridge, is an architectural wonder and one of the most photographed spots in the city. Once you tire of history, there are many beaches in the area showcasing the city’s natural beauty – perfect for a relaxing beach day.

The southern city of Charleston has a characteristic slow life atmosphere, and food occupies a pivotal place in its culture. Don’t miss out on typical local dishes of oysters, shrimp, and grits.

The history of Savannah goes back to the 1700s. Its history is well preserved in the city’s Victorian houses, tree-lined streets, and squares. Some spots you should not miss are River Street, Kehoe House, and Forsyth Park.

The Riverfront District is home to many notable historic buildings. It is also a shopper’s paradise with chic shops and cafes.

You will also find the best of southern cuisine at Savannah. Be it art, culture, or history; Savannah offers everything in ample doses to keep you busy.

Midnight in the Garden of Good and Evil Tour

New Orleans is a melting pot of cultures that stands out amongst all of America’s cities. New Orleans is a city known for its festivals, especially the famous Mardi Gras; it’s a great place to explore American history and incredibly vibrant culture.

The French Quarter is one of New Orleans’s most iconic areas, with its arcades, red-tiled roofs, and courtyards. The Royal Street combines history with culture, art, and fine dining, while Bourbon Street is famed for its boisterous nature – a constant party at every hour of the day. The St. Louis Cathedral, a famous New Orleans landmark.

The National WWII Museum is a must-visit destination. Get a real-life feel of the war through the films, photos, and oral presentations.

If you love jazz, New Orleans is the birthplace of jazz, so there is no better place to indulge your love of music. Ditto for food.  The food in New Orleans is some of the most unique and wonderful you’ll find anywhere in the world.

You must have been wondering where America’s capital is on this list. No historical trip of the country is complete without visiting the capital, the seat of freedom, liberty, and free-thinking: Washington, DC.

Get a first-hand experience of American history at the monuments and museums of this grand city. Visit the White House, the US Capitol, the Smithsonian Museum, and the National Gallery of Art. Washington is known for art and culture, and the John F. Kennedy Center of Performing Arts attracts many visitors for its stellar performances.

Include Lincoln Memorial, Washington Monument, and the National Museum of American History, and you have a fascinating, history-loaded Washington itinerary. Don’t overlook the Vietnam Memorial and the Martin Luther King Memorial – both are incredibly moving. There is so much to see in the US capital.

While comparatively, America might be a young country, there is an incredible wealth of fascinatingly historic cities to explore. 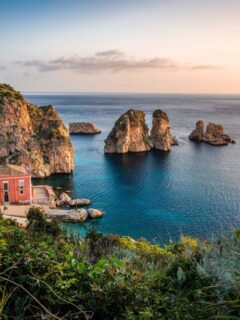 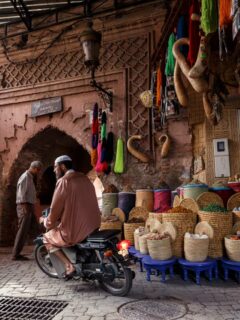