Home >> Europe >> France >> Beautiful Places You Must Visit in Ariege: The Midi-Pyrenees France

In the southwest of France, nestled in the Midi- Pyrenees is The Ariege Department, one of the least populated and unspoilt regions of France. 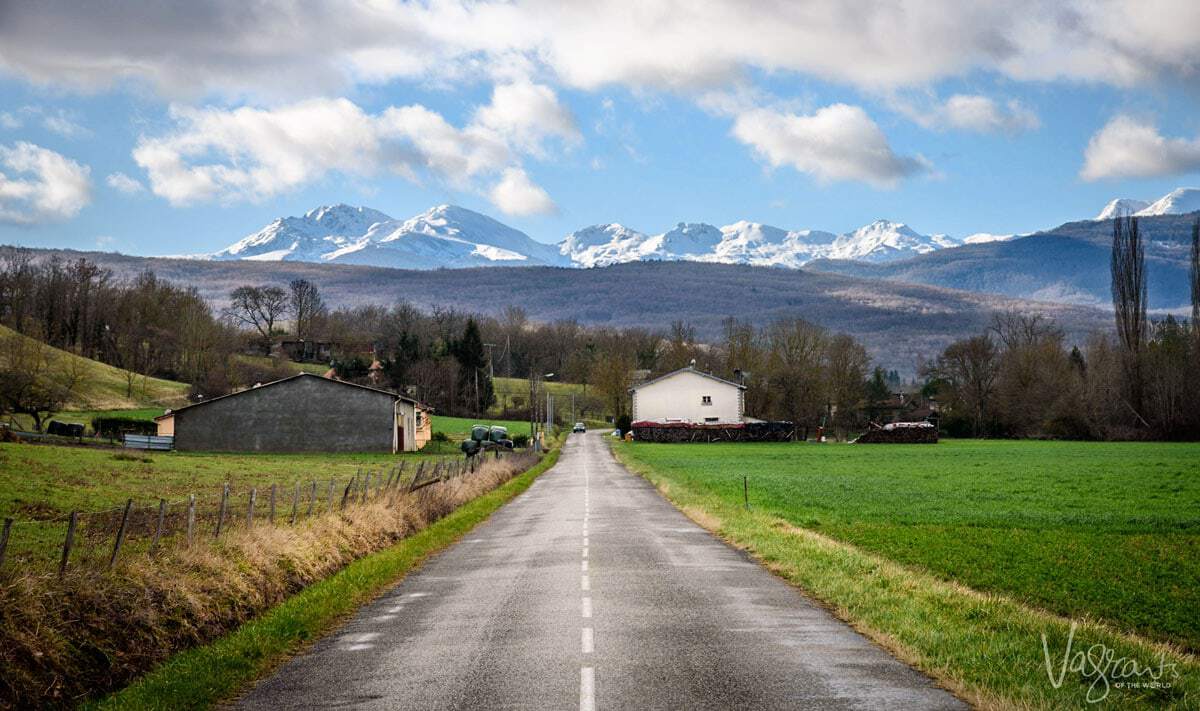 The perfect French road trip destination, the region is awash with natural beauty, history and fairytale-inspiring medieval villages. Ariege also boasts some of Europe’s most impressive subterranean rivers and cave systems which still bear paintings from a prehistoric past.

Related: The Best Time to Visit Europe to Explore the French Pyrenees 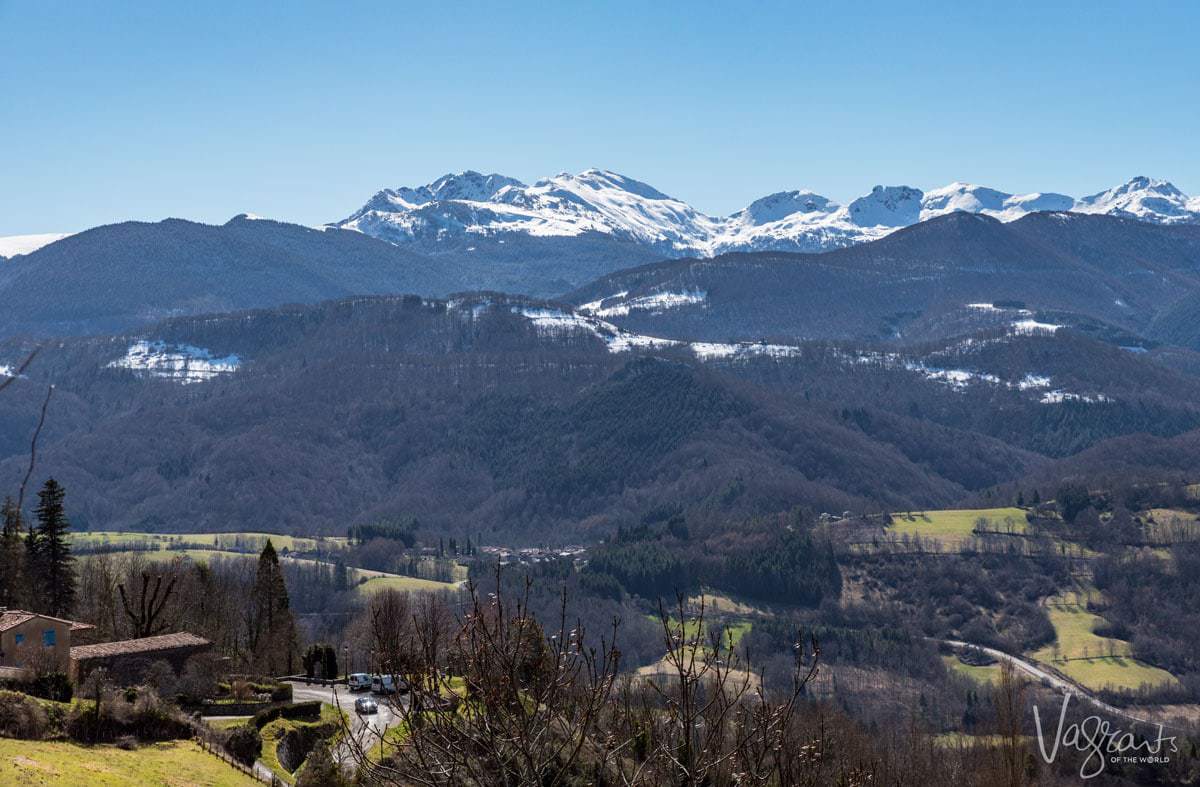 Stunning landscapes rise to meet the magnificent Pyrenees mountains making the region a perfect destination for hiking, skiing and climbing.

Add to this a very agreeable climate and superb local cuisine, a legacy of fiercely protected traditions, and you may want to stay forever.

If you are planning a holiday to the Midi-Pyrenees in the southwest of France, here is a small taste of why the Ariege region should not be missed. 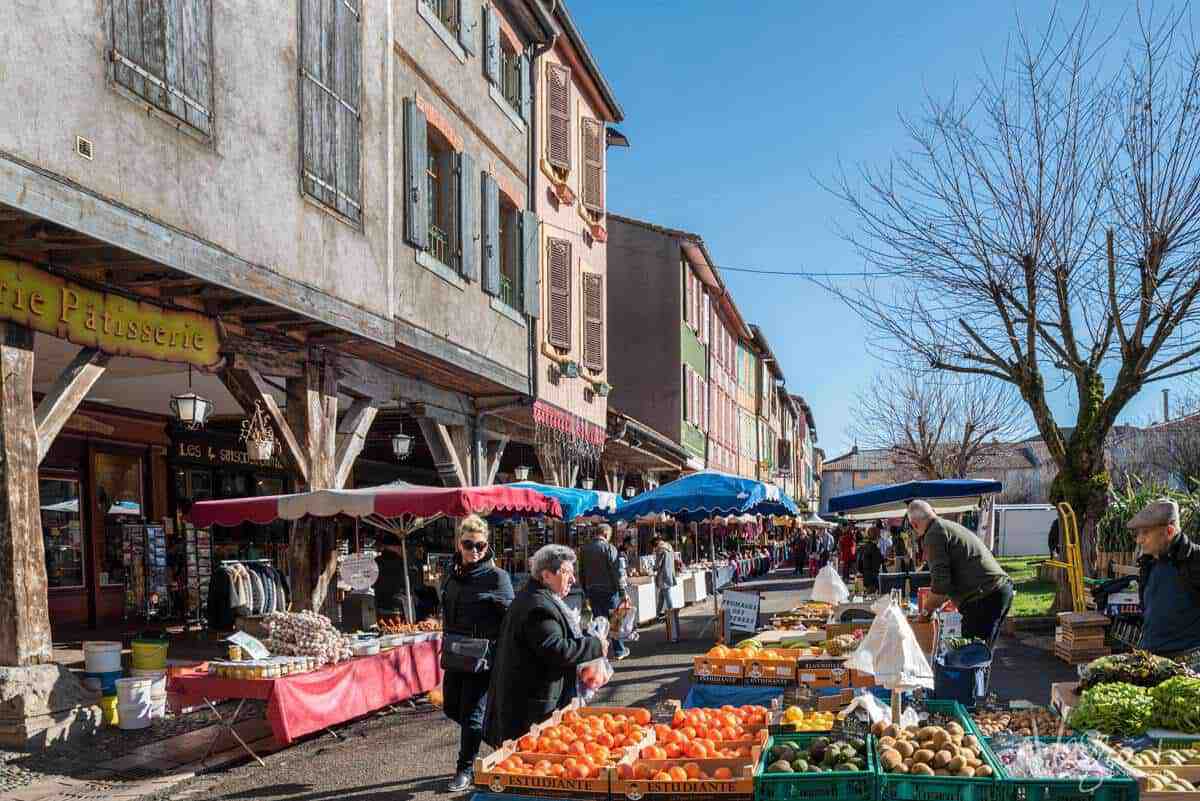 Foix – The Capital of Ariege

What better place to start than in the capital of the Ariege; Foix. You can see the main attraction of Foix long before you reach the town itself; the magnificently restored Chateaux de Foix. Built before the seventh-century; the fortress dominates the town from high on the hill and is the jewel in the Foix crown. 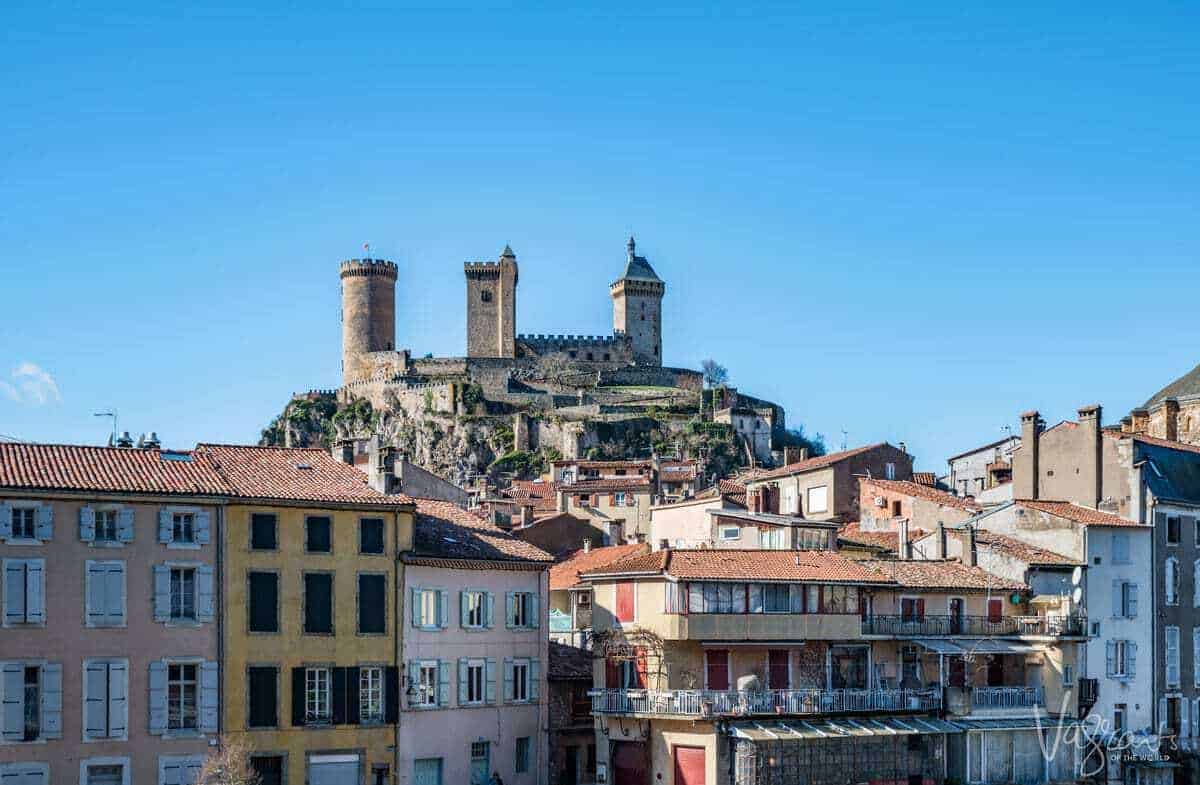 Once home to one of the great barons of 14th century France, Count Gaston Phoebus, the castle with it’s three prominent towers is an indication of the power the counts of Foix must have yielded in the day.

Chateaux de Foix is one of the last remaining intact castles in the Ariege, a perfect starting point for exploring other Cathar Castles in the region.

Wander through the castle and visit the chamber of Henry IV who later became King of France in the 16th century. From the towers, you will be rewarded with magnificent views over the surrounding countryside and the Pyrenees peaks in the distance.

Entry to the Castle of Foix:

Opening hours of the castle vary according to the season, and the castle is often closed at lunchtime. Expect the castle to open between 10.00 and 10.30 and close around 5.00.

Check the official website for current opening hours before planning a visit. 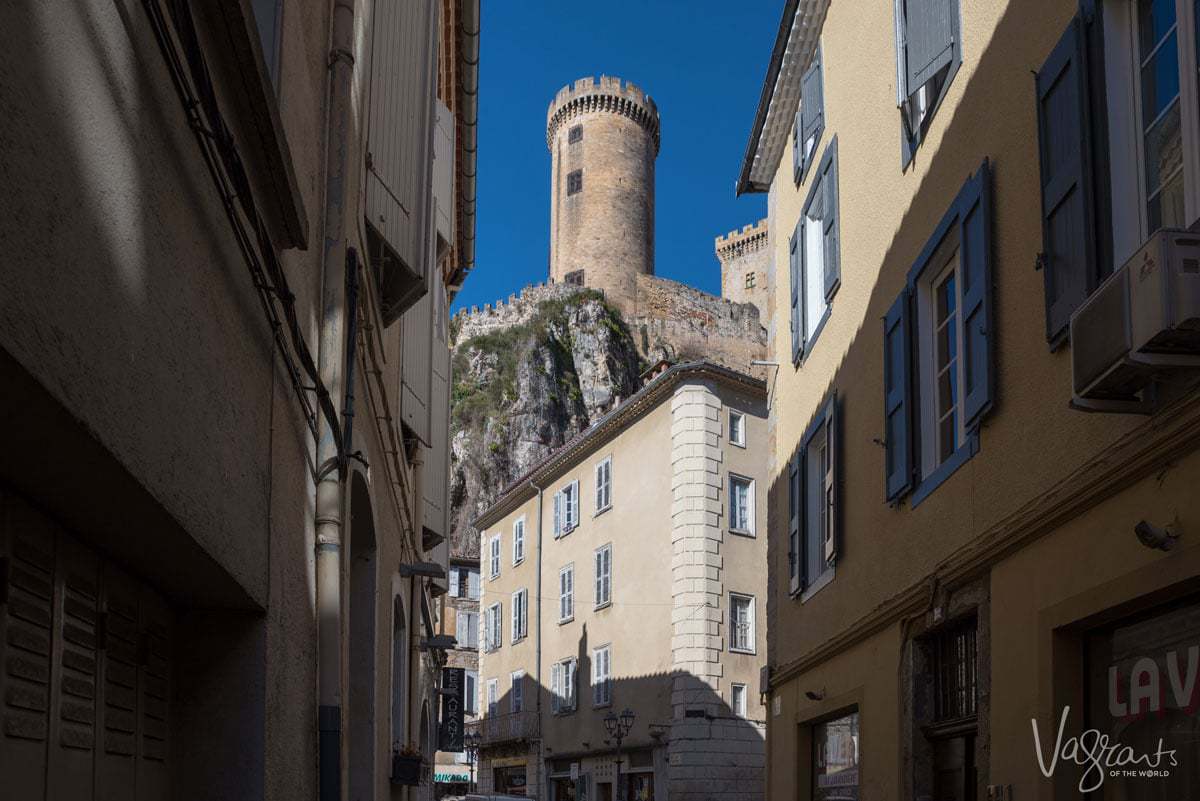 Spread below the fortress steps; the original medieval town weaves a beautiful web of tiny streets to be explored filled with traditional restaurants and boulangerie’s, guest houses and boutique stores.

The Old Town also has a lovely display of half-timbered houses dating from the 16th and 17th centuries. 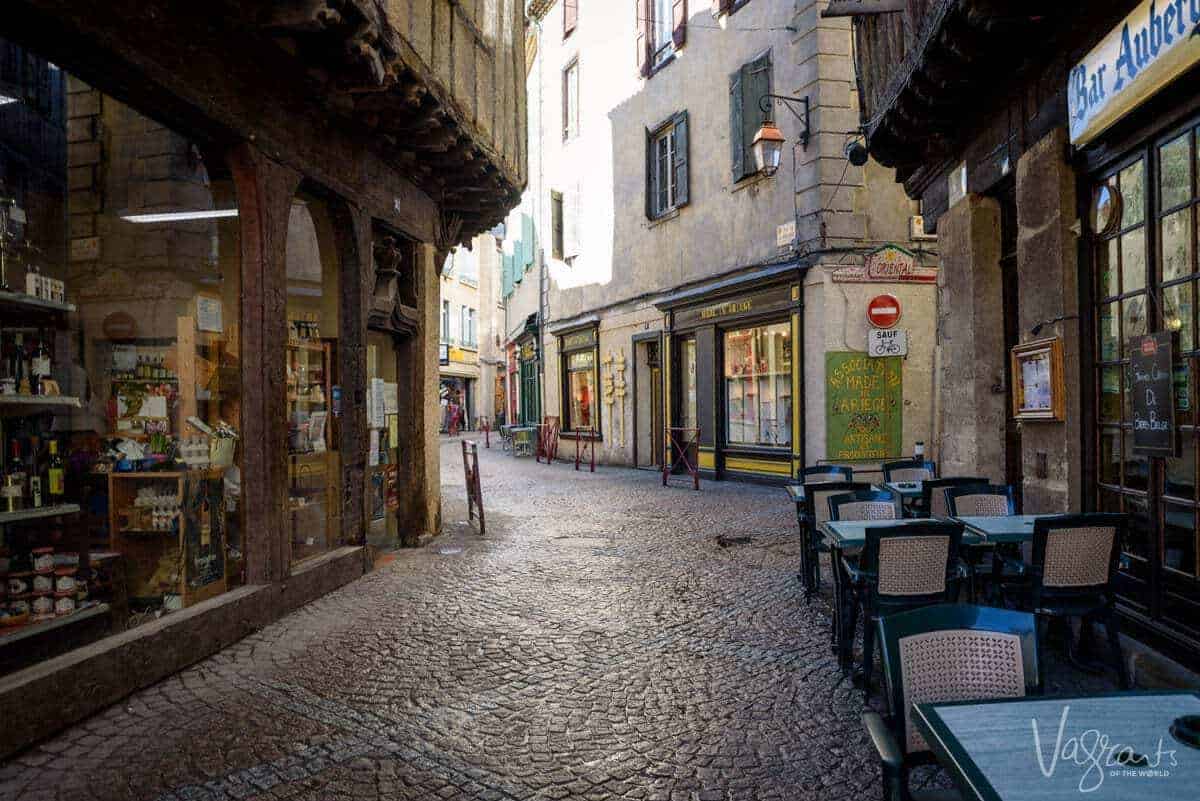 Out on the town square, you will find a mix of traditional and modern with plenty of pubs, cafes and a lively scene that makes Foix a town you will want to revisit.

Foix is approx 85 km south of Toulouse, just over an hours drive. 100 km north of Andorra, under 2 hours driving. 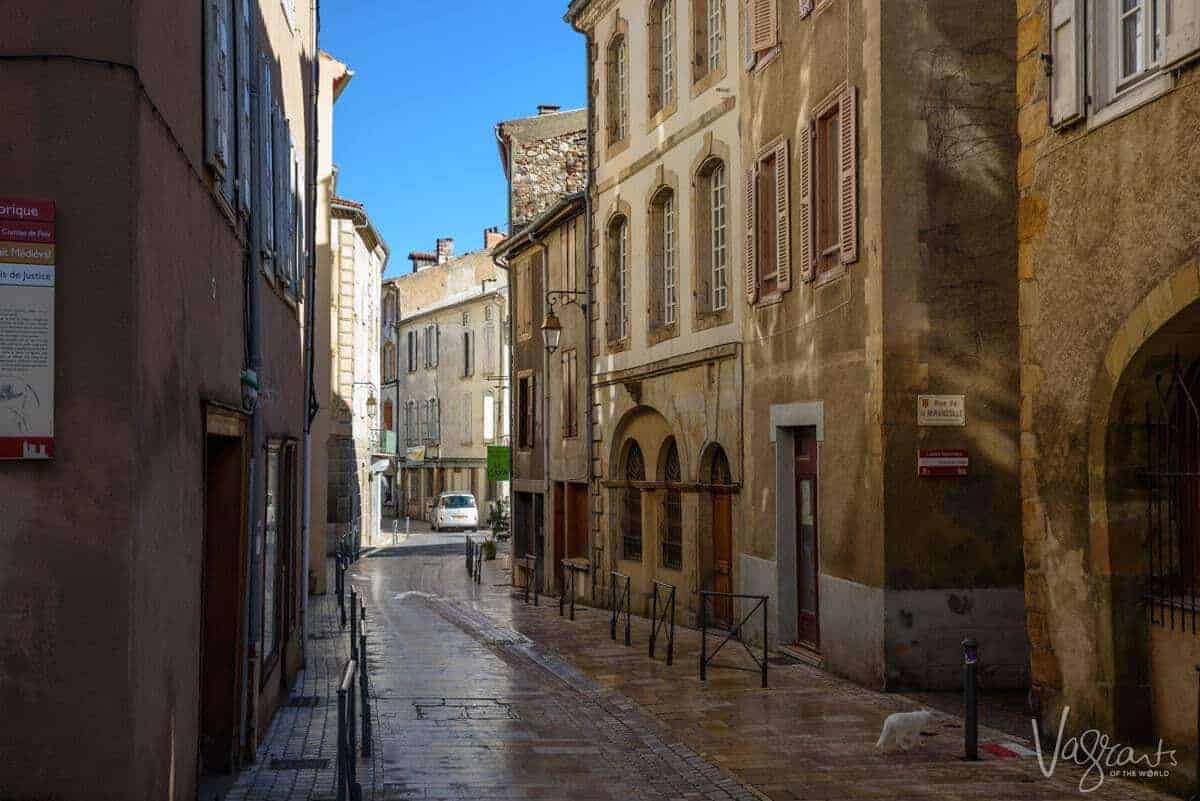 Camon – One of the Most Beautiful Villages in France

Sometimes known as “Little Carcassone” the fortified village of Camon is listed as one of the most beautiful villages in France.

The village grew from the Benedictine abbey which dates back to the 10th century. The abbey has been a private residence since the French revolution, and now, part of the ancient building is a beautiful hotel and restaurant.  L’Abbaye Chateau De Camon has been voted one of the top 5 castle hotels in France.

Tours of the abbey can be taken only by arrangement with the Camon tourist office in the centre of town. 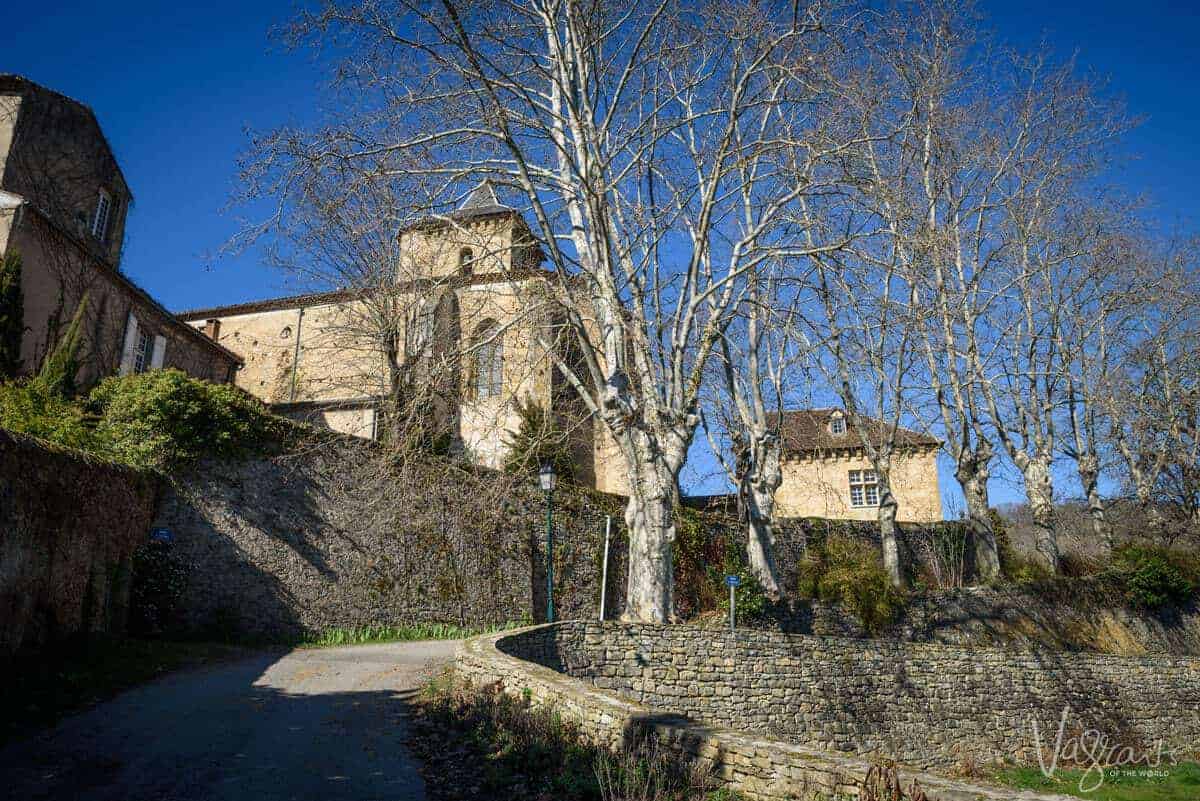 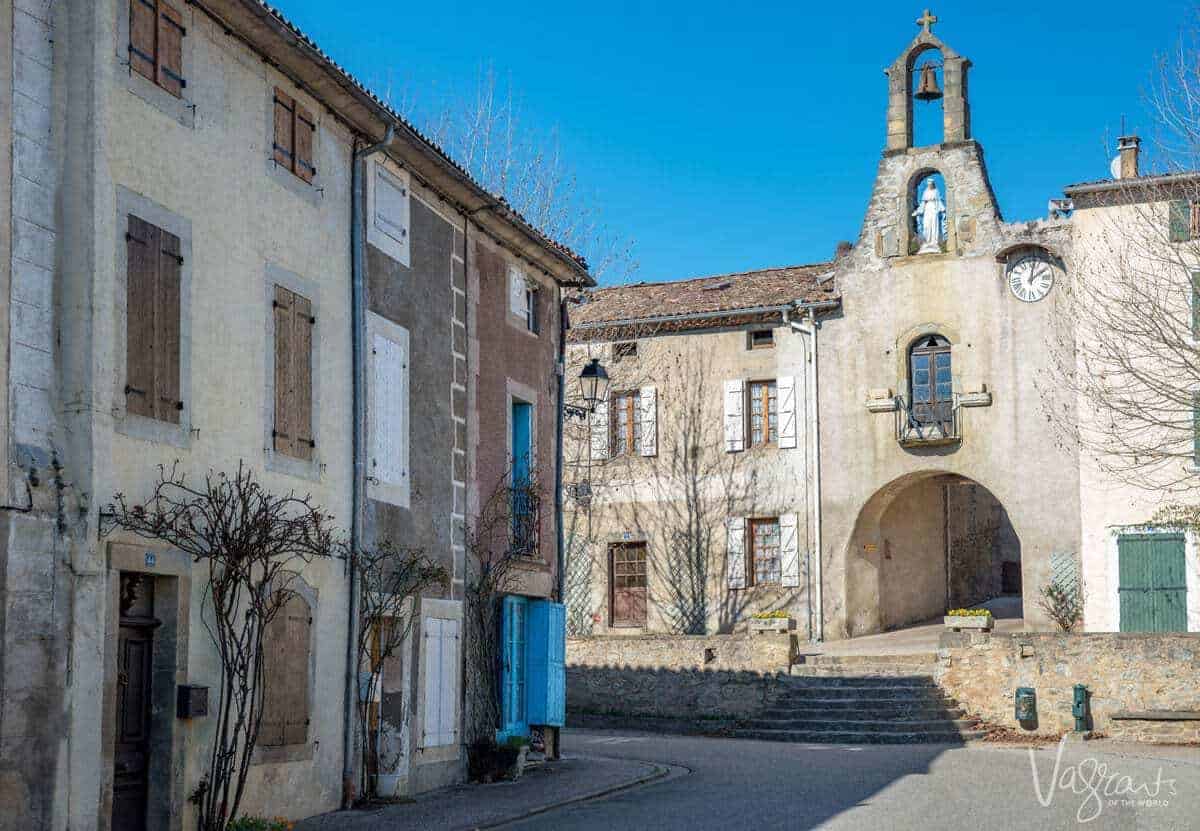 570 hectares of clear turquoise water set against the Pyrenees mountains, Lake Montbel, is the perfect place to chill out.

There are a number of organised beaches offering supervised swimming during the peak summer months, restaurants and bars, a sailing school and plenty of water sports activities. 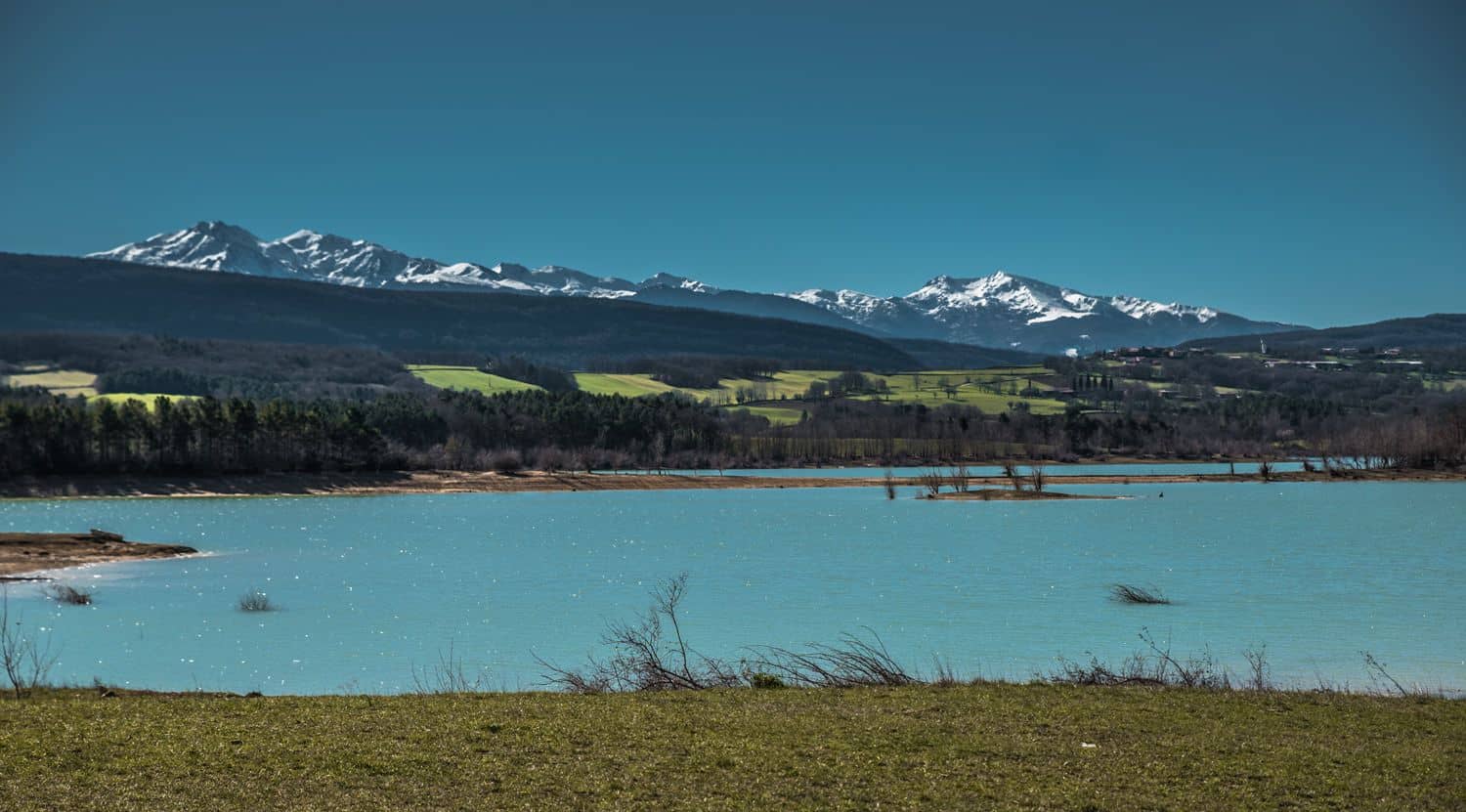 Walking and Hiking at Lake Montbel

Mostly undeveloped, Lake Montbel is also an excellent spot for hiking and walking. There are plenty of marked walks all around the lake where you can find a quiet place for picnics or fishing. 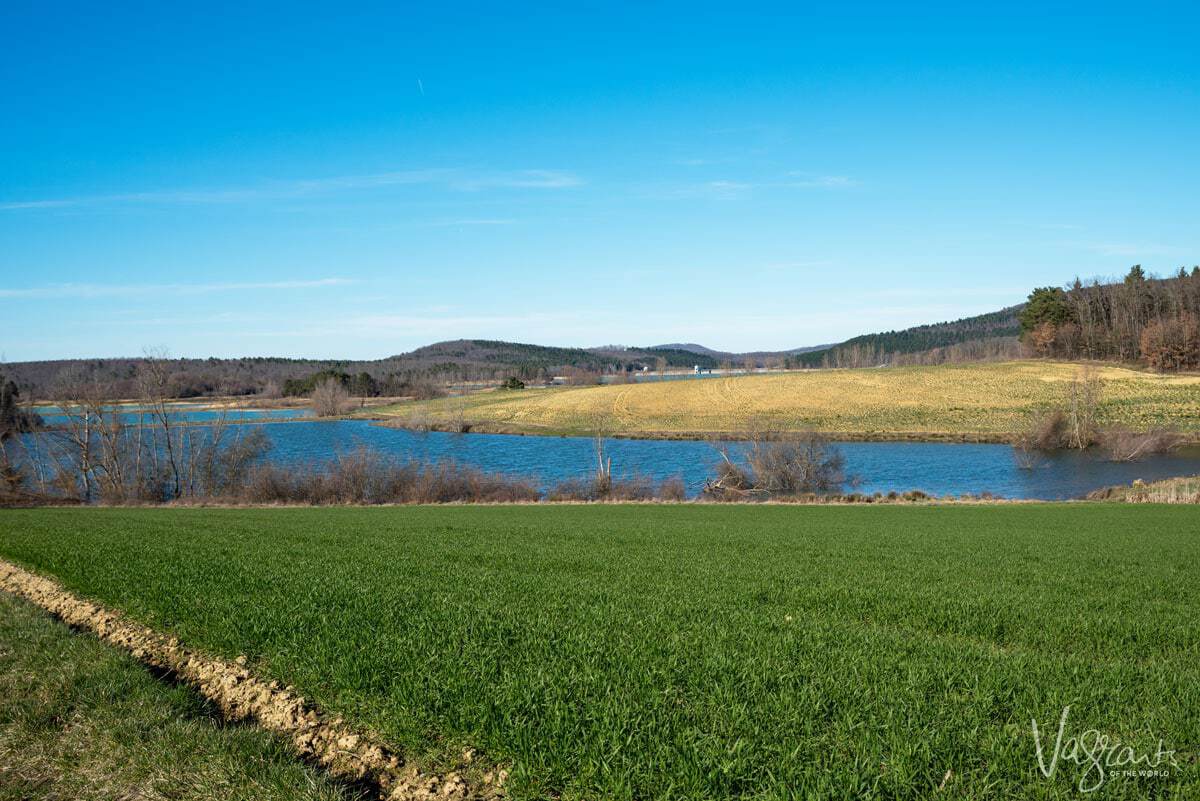 Although probably more impressive from a distance, the ruins of the Chateau de Lagarde are still worth a visit up close.

Lagarde was initially built as a medieval fortress in the 10th century. Over time, it was expanded as a renaissance palace, eventually becoming a classical home, a factory, and even a storehouse. 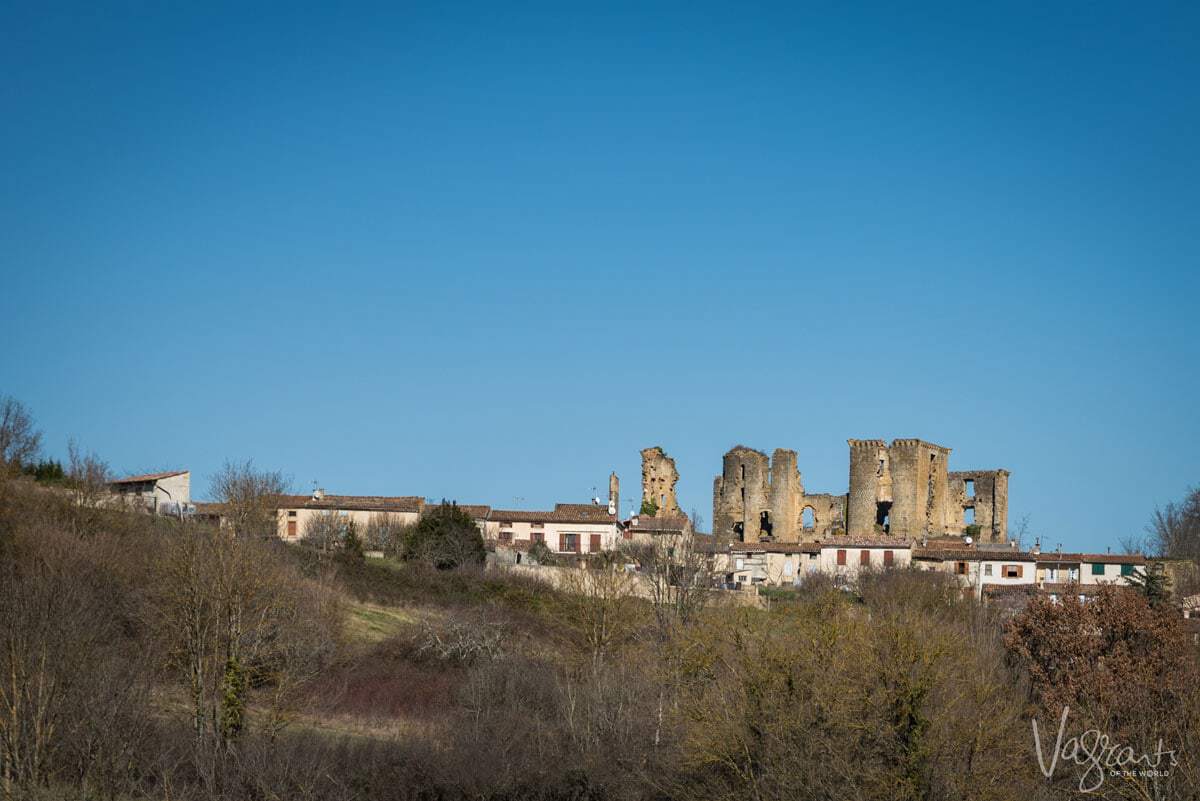 Partially destroyed during the French Revolution it did not take long for the grand chateau to become a ruin. Although in ruins, the chateau still cuts a dramatic silhouette when viewed from down in the valley. 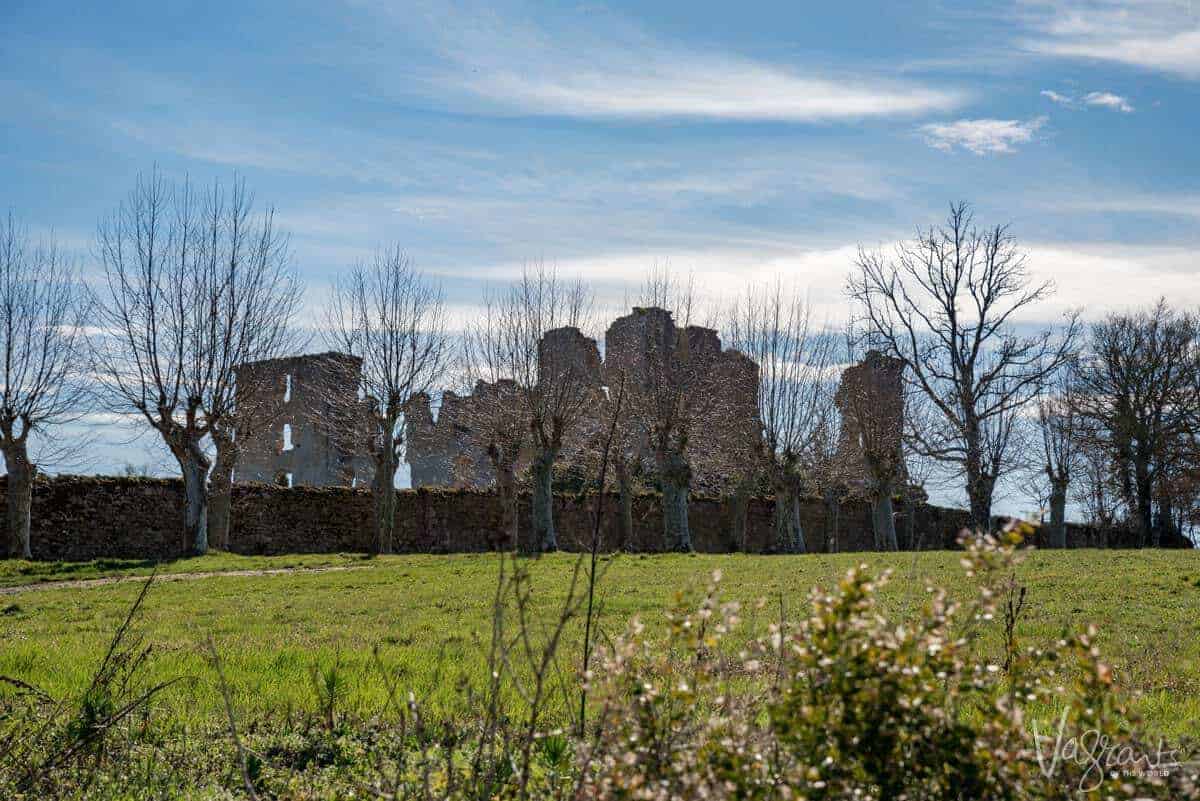 While the structure is no longer stable enough to allow visitors inside the fortified walls, the pretty medieval town of Lagarde is worth a stroll through. 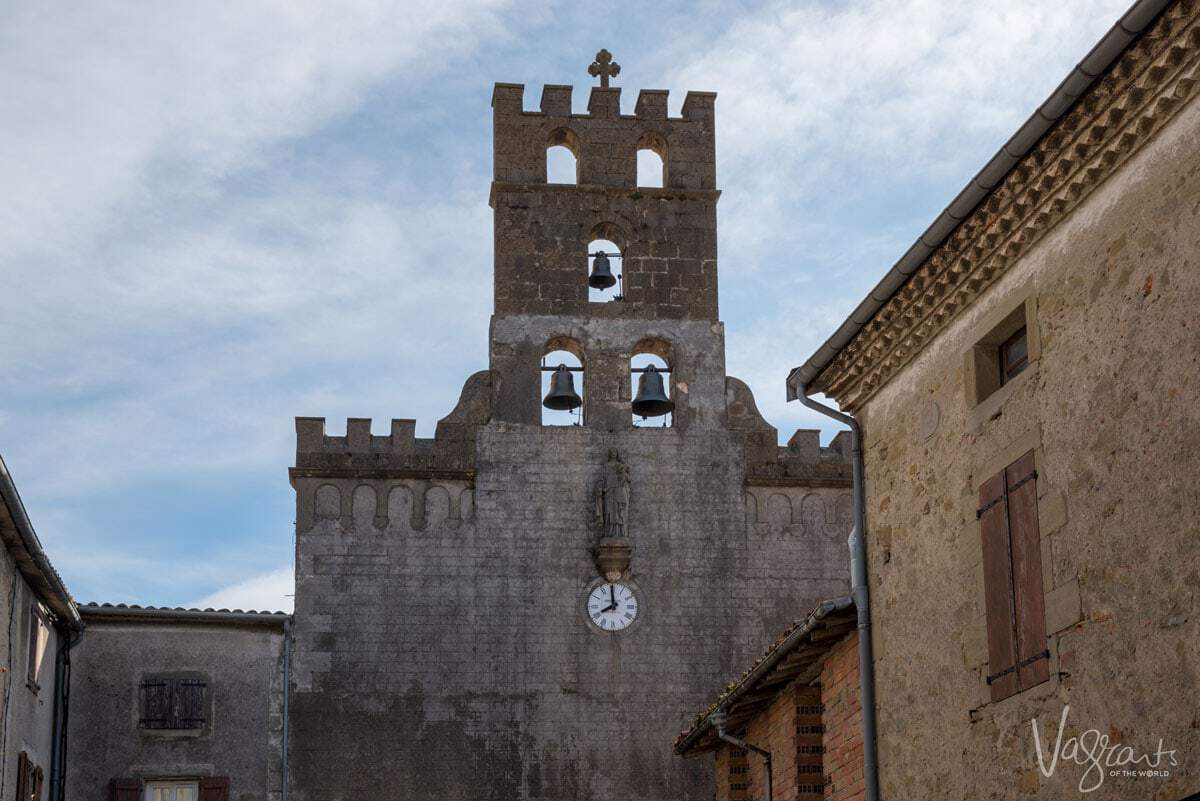 Starting from the town of Lagarde, outside the castle walls, there are some very scenic walks, part of the GR 7 walking routes that run through Spain, Andorra, and France.

A circular walk will take you from the village, through spectacular countryside, with, of course, the Pyrenees always in sight, returning again to Lagarde from the other side.

Pack a picnic as there are many beautiful places to stop and enjoy the Ariege countryside. 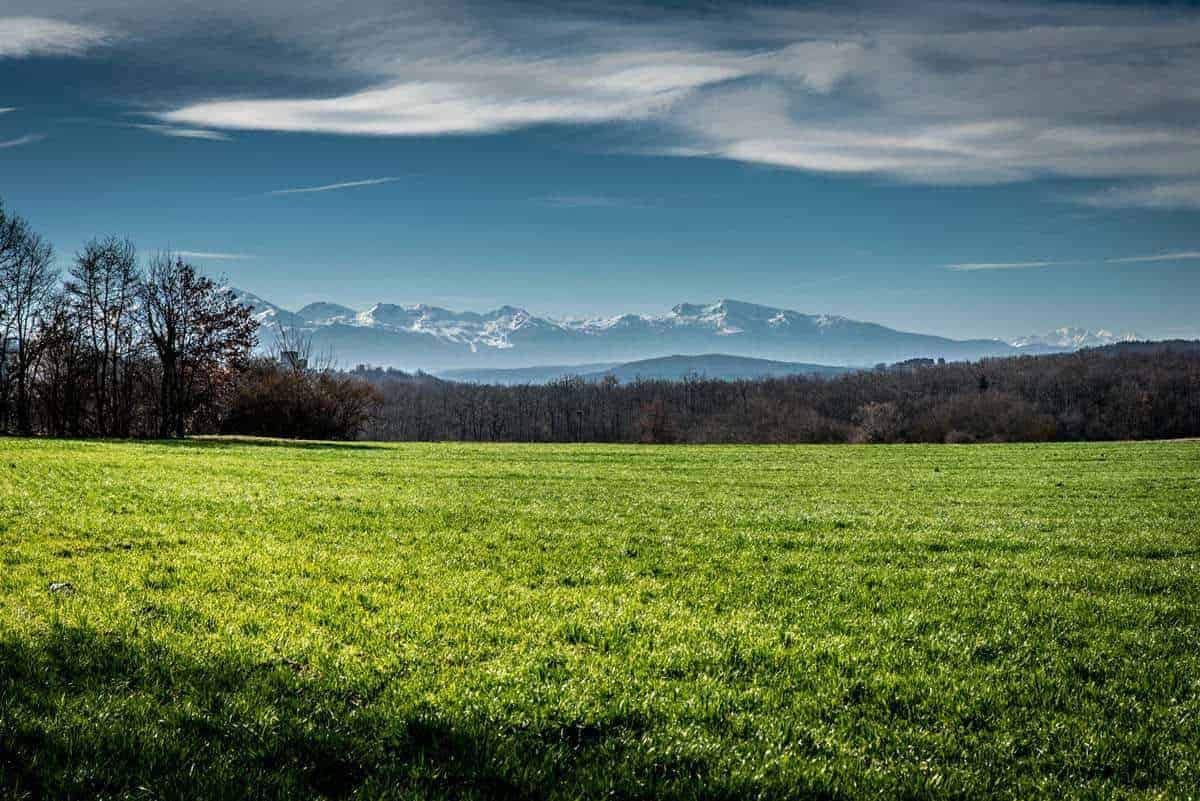 Mirepoix is one of the prettiest and best examples of a medieval town in the Ariege. As you have seen already, that’s saying something. The bustling little market town is nothing short of a delight. 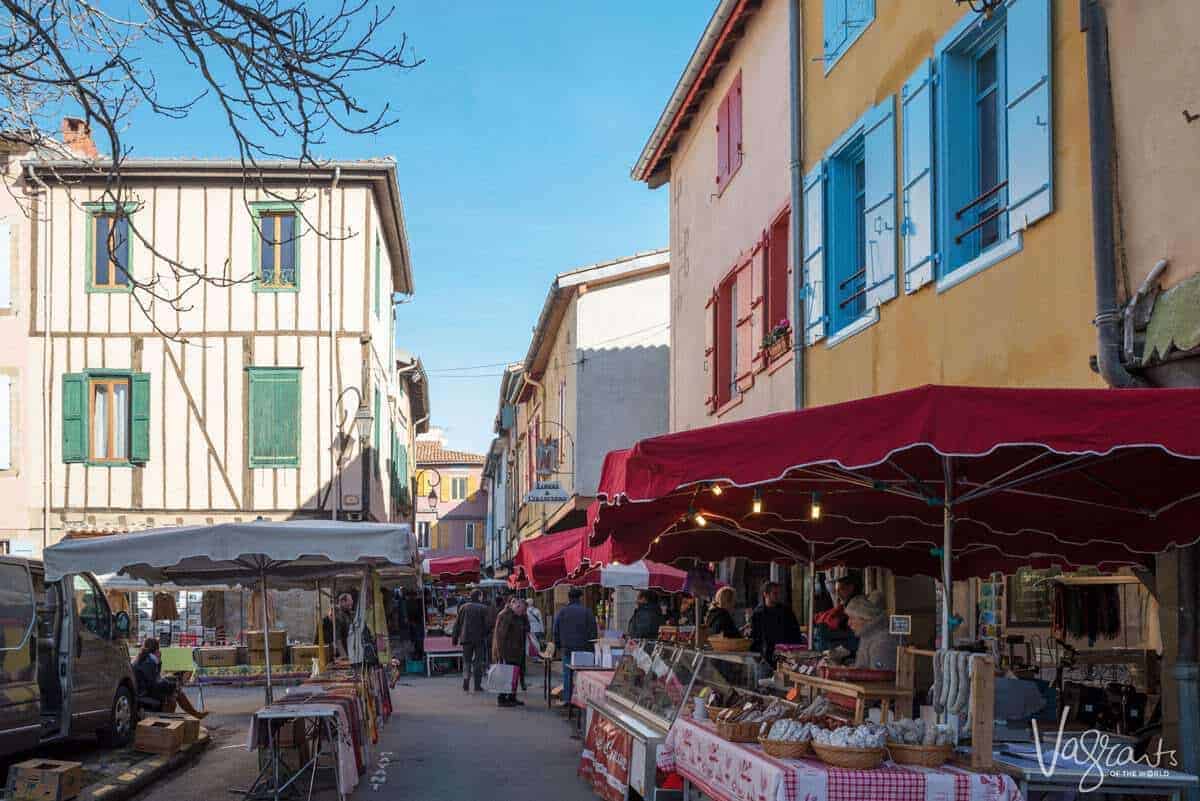 On a Monday morning, you will find the weekly outdoor market in the central square. Every food lover’s dream, stalls overflow with French gastronomic delights. 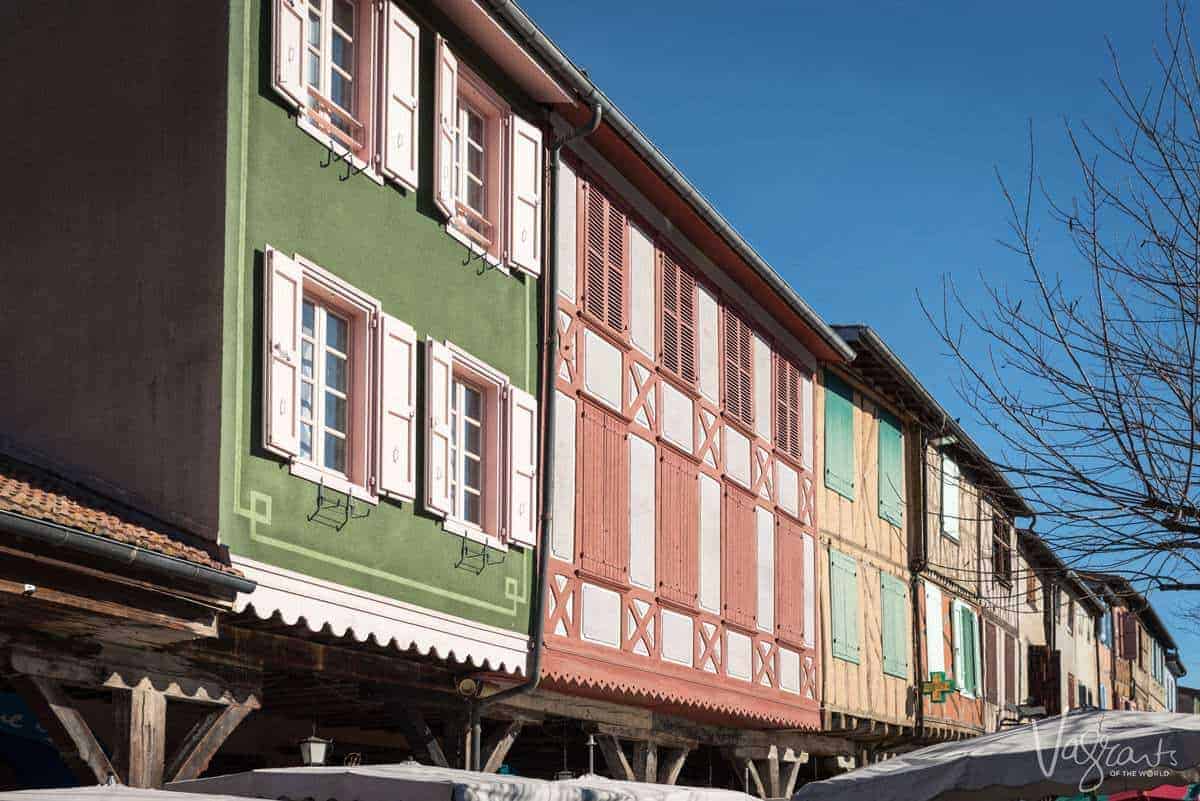 You will find incredible local produce and regional delicacies such as the regions famed foie gras and confit de canard, saucisson, and locally made cheeses. 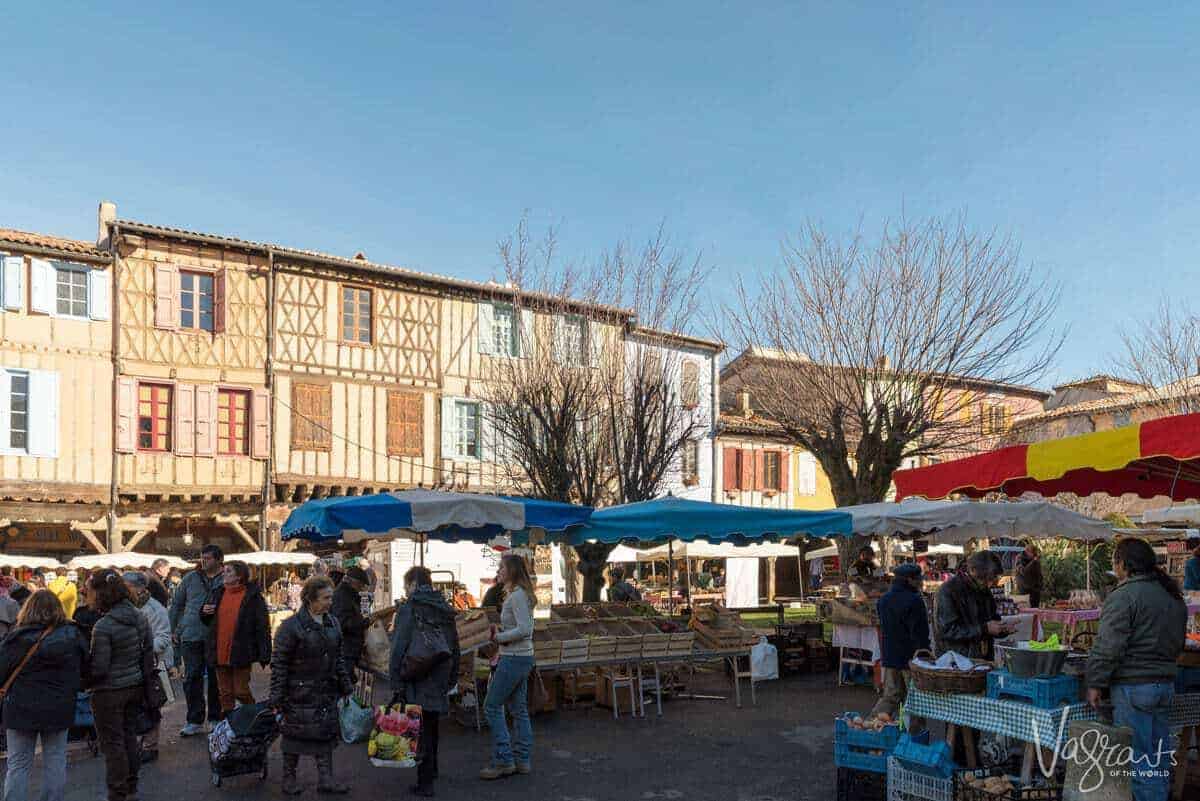 Visit Saint Maurice Cathedral in the centre of town. The second largest single-naved church in Europe, the gothic style cathedral is a classified Historic Monument.

Relax in one of the many cafes in the Place des Couverts and enjoy the atmosphere of the beautiful medieval town. Or, indulge in some regional cuisine from any of the towns wonderful restaurants. Mirepoix is the perfect place to position yourself for exploring Ariege and the Midi-Pyrenees. 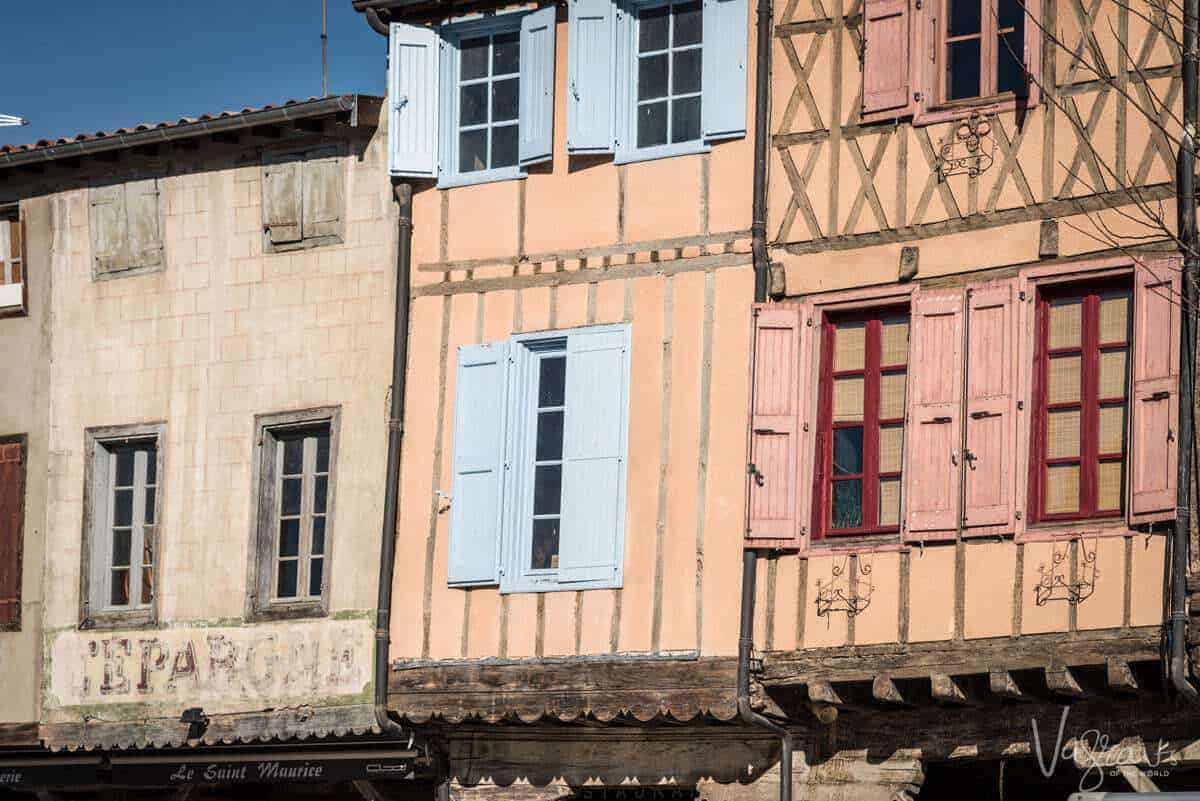 The tiny village of Vals may only have a population of less than 100, but it packs a punch when it comes to religious architecture of the middle ages. 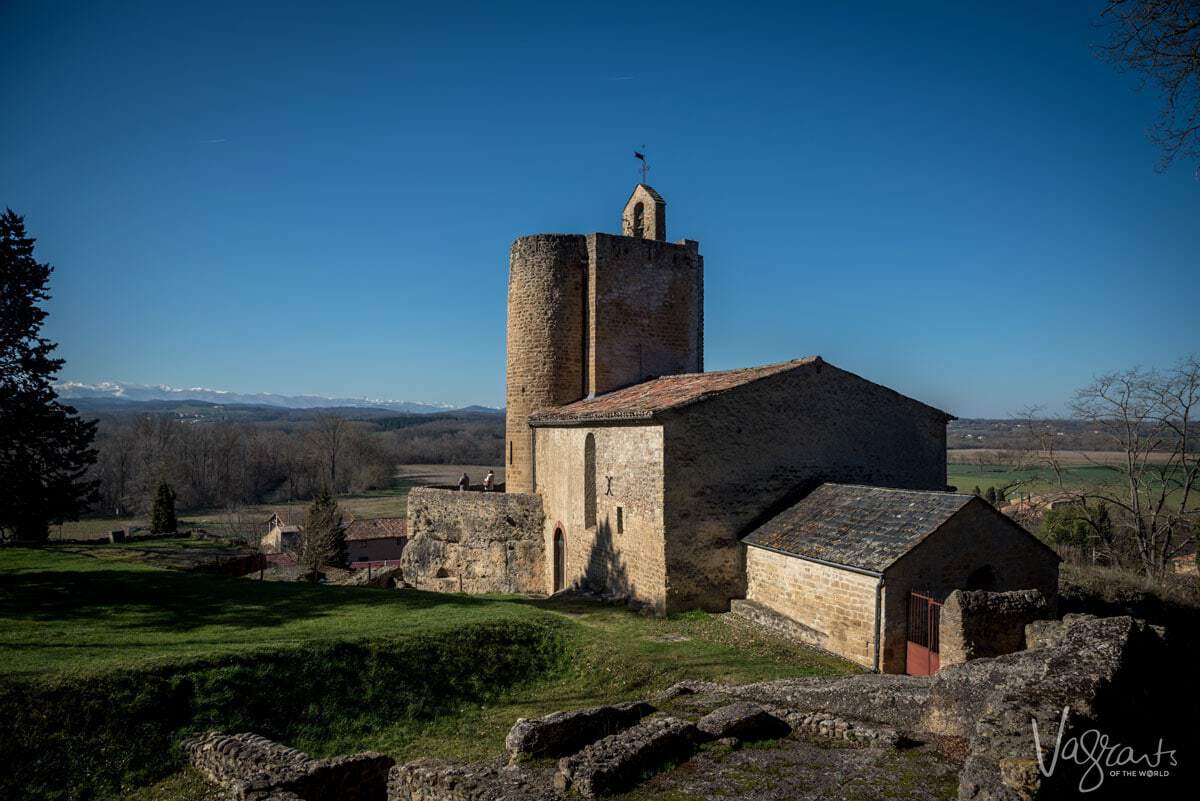 The church of Sainte Marie is especially interesting as it’s three levels have been partially carved from the rocks. A small, hidden cleft in the rock reveals a stairway leading to the church’s entrance. 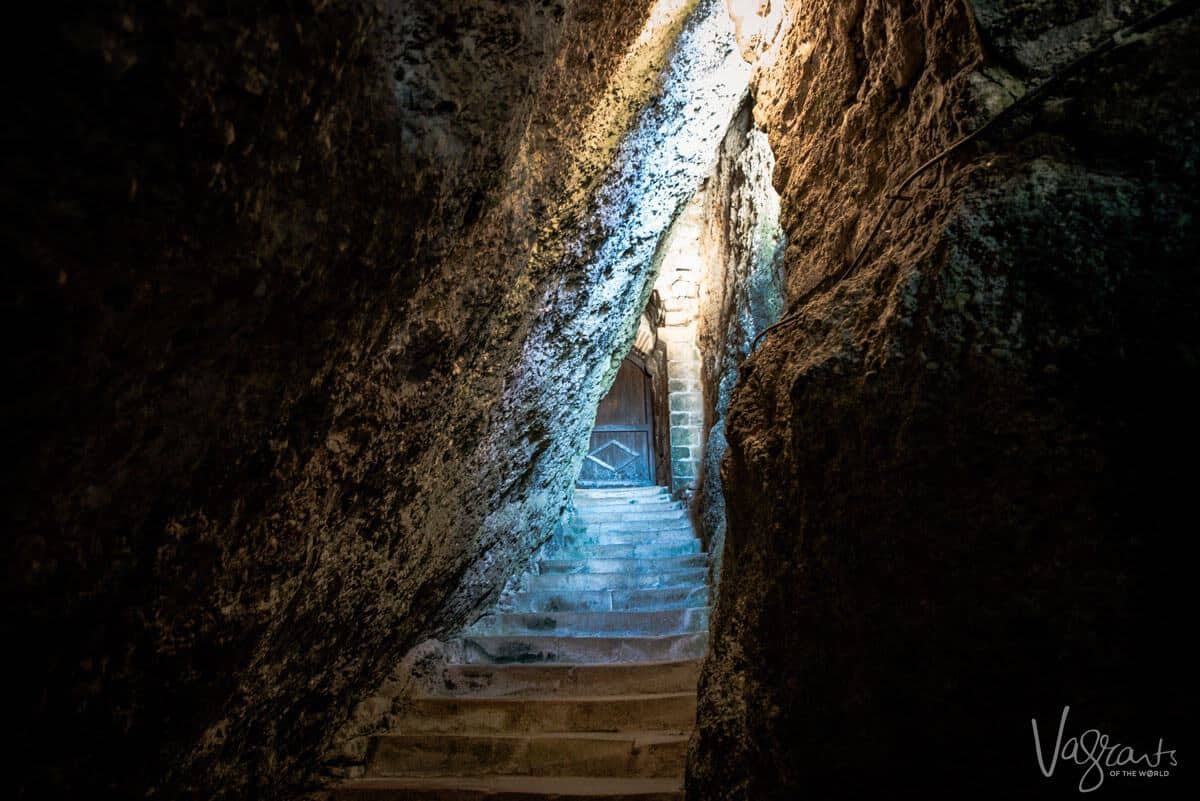 Once inside you will be treated to beautiful eleventh-century Romanesque frescoes depicting the life of Christ. The church also has a terrace offering spectacular views of the Ariege Pyrenees. 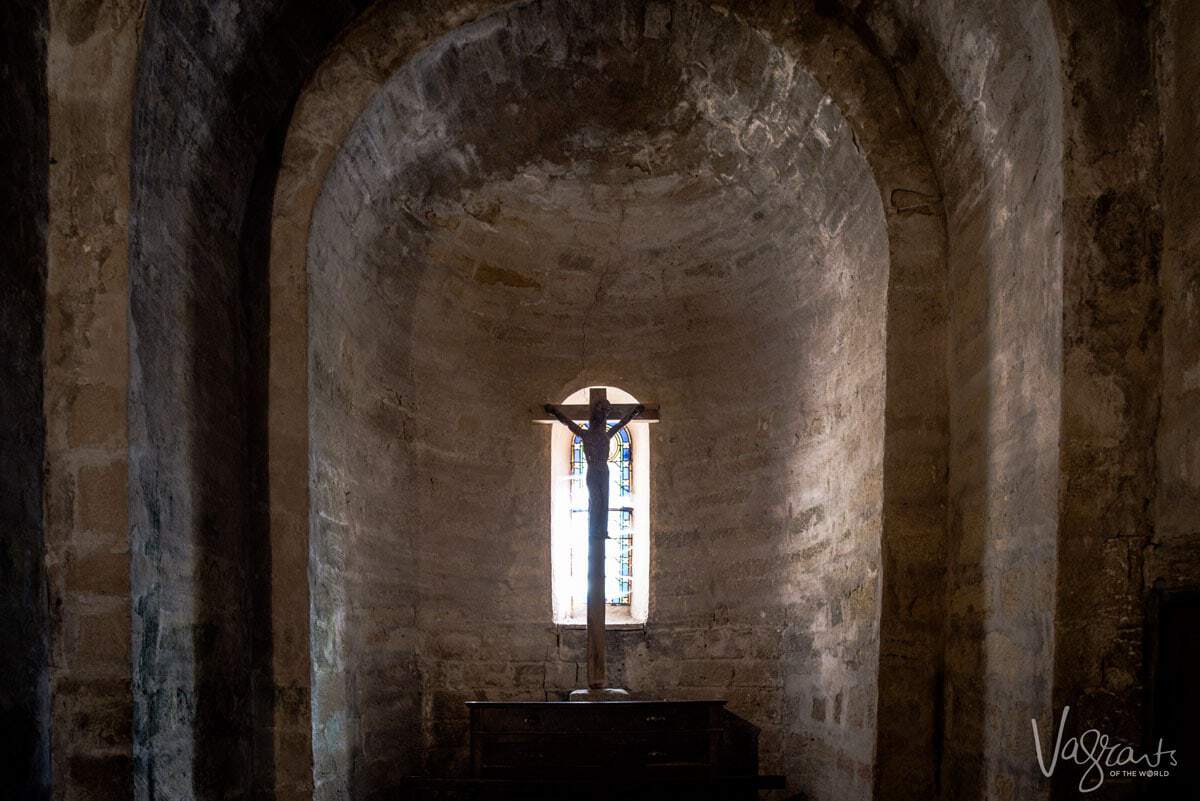 Vals is another great starting point for the GR 7 tracks. Perfect for some lovely day hikes or a picnic. 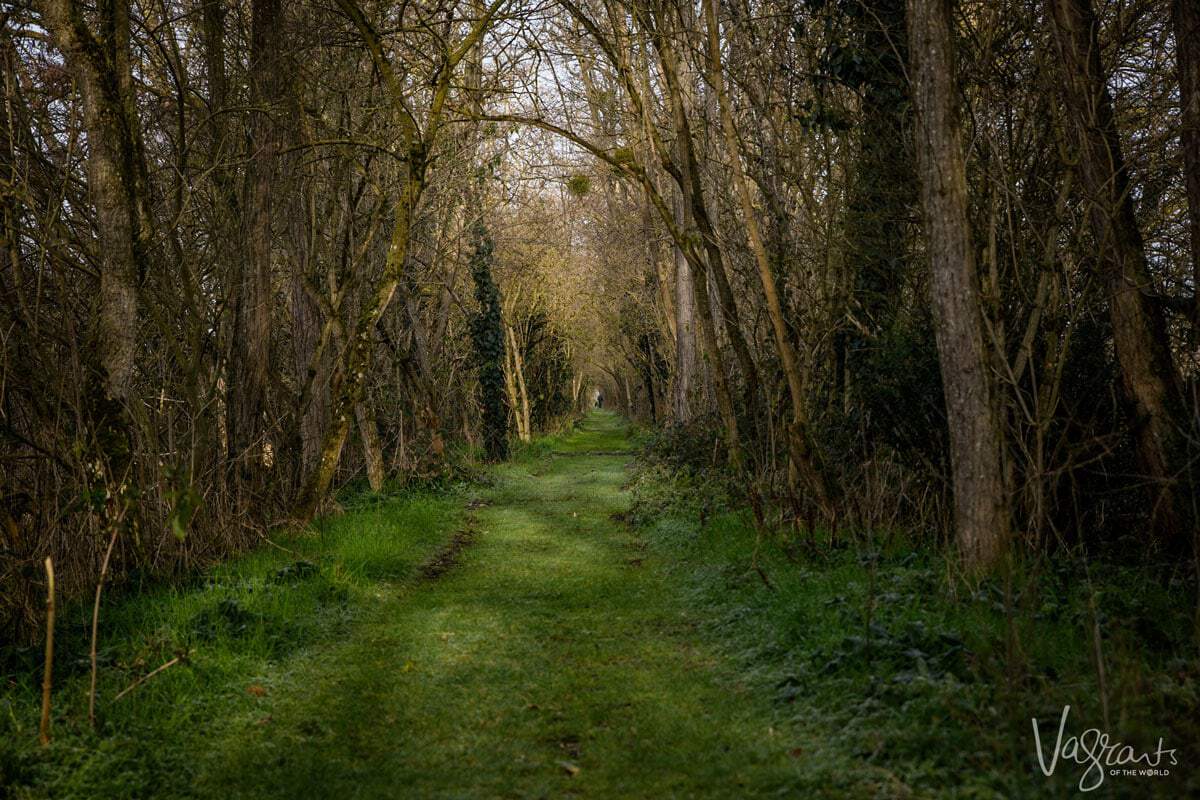 Discover More of the Ariege

These eight beautiful destinations in the Ariege maybe highlights but are only a small sample of what this beautiful region has to offer. Here are just a few more reasons to visit Ariege.

Much of the Ariege territory has been a Regional Park since 2009 so is an ideal destination for the outdoor enthusiast. Ariege is the perfect destination for hiking, mountain biking, skiing, fishing and whitewater sports.

Once you have done all of that, there is still an endless number of beautiful French towns to explore and then there’s the rest of the Midi-Pyrenees. 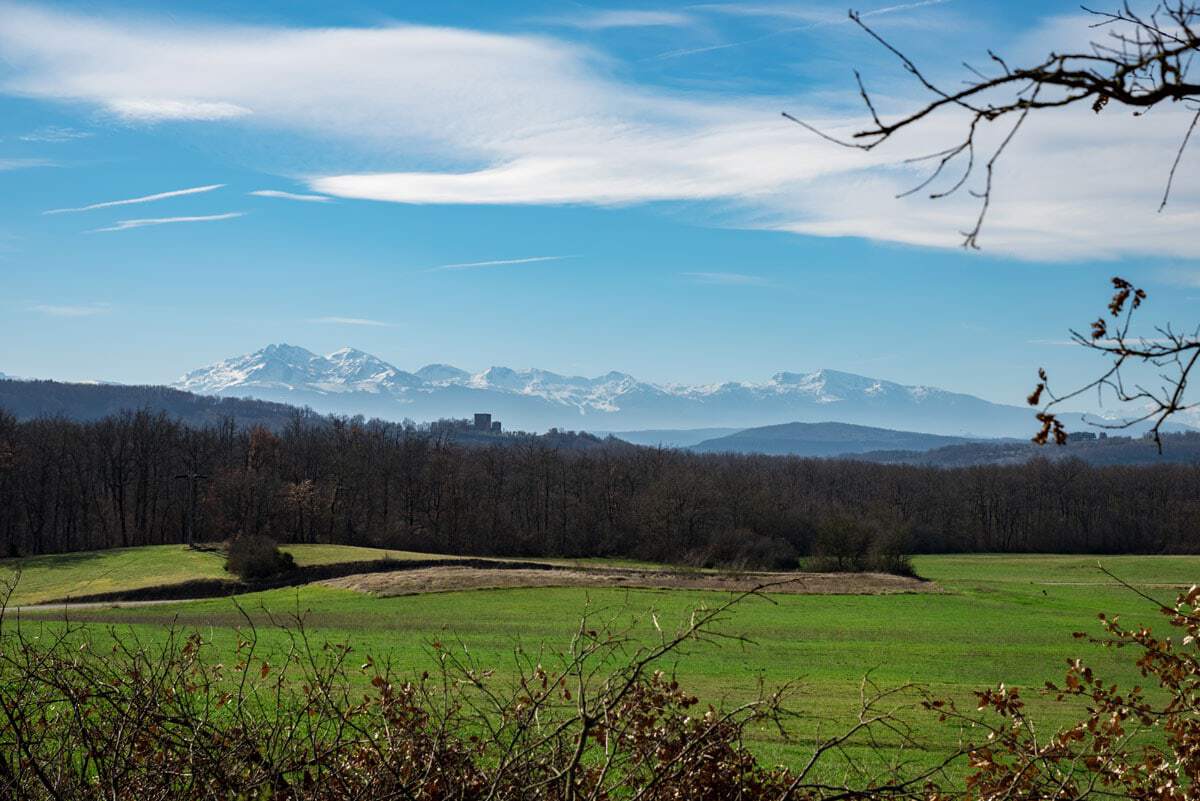 How to Get to Ariege and the Midi Pyrenees

Despite the Ariege being so rural, it is very well connected by air. Toulouse (Blagnac) and Carcassonne airports are both only 1 – 1.5 hrs depending where in the Ariege you are going.

However, at the moment the most popular way to reach the Ariege Department and the Midi-Pyrenees is from the city of Toulouse as there are currently more flights and low-cost airlines servicing this airport.

Tarbes-Lourdes is also less than two hours away although has limited flight schedules.

There is a train station in the Ariege capital of Foix, however, it may be more convenient to travel to Toulouse. From Toulouse, you can collect a hire car directly from the station.

There are regular trains from Paris as well as evening sleeper trains. Sleeper trains leave at approx 22.00 hrs and 23.00 which is perfect for those want to spend an entire day in Paris.

The train will take between 4.5 – 6.5 hrs depending on the service.

Tip for Train Travel in France

If taking a sleeper train, ladies travelling alone should look for the “Solo Lady” option which offers a space for women who wish to travel at night in peace. The service is free. 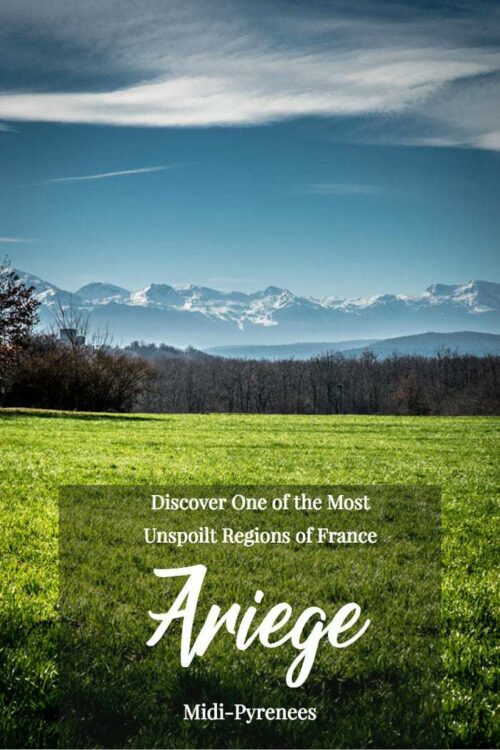 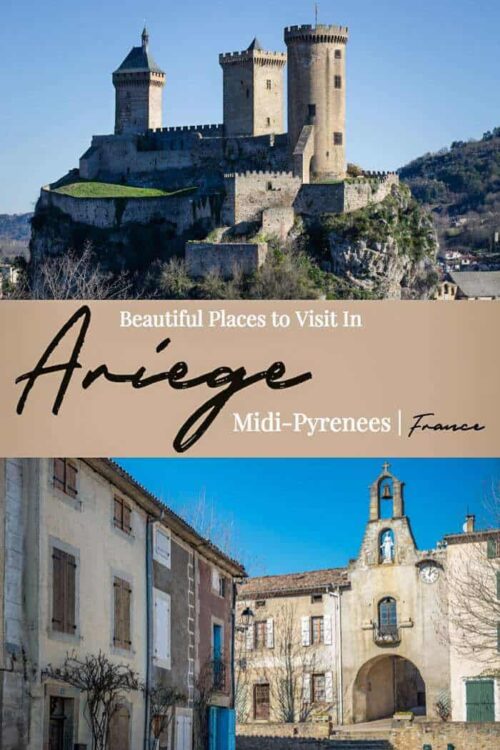 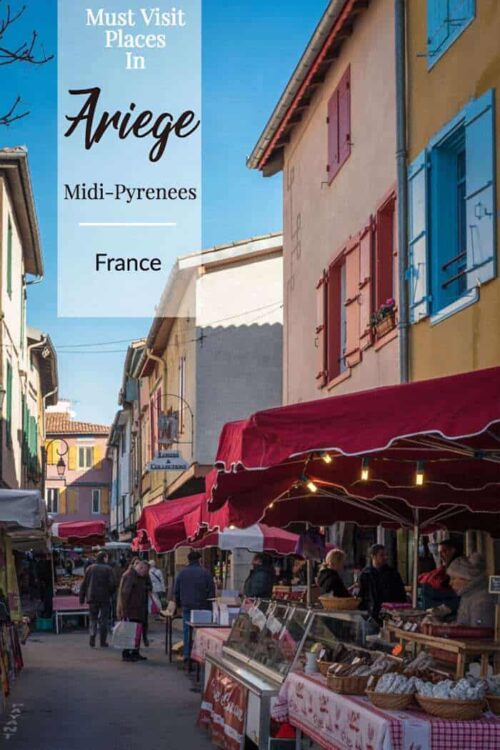 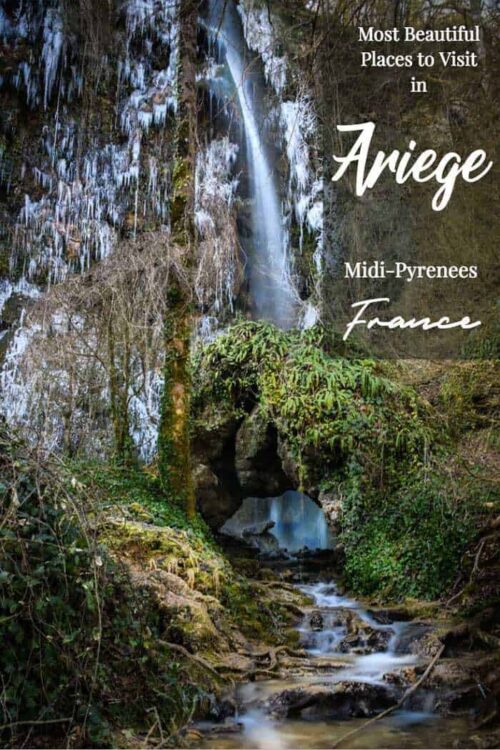